ProtonMail Compares Apple to Mafia, Says App Was Forced Into In-App Purchases in 2018 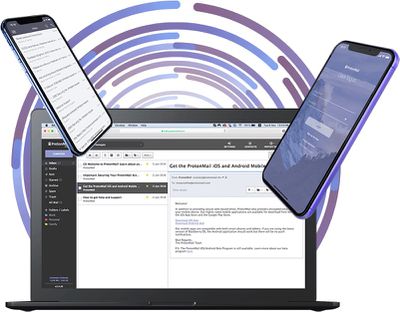 Yen told The Verge that back in 2018, ProtonMail was forced to add in-app purchases to its app, which had been in the App Store since 2016. ProtonMail at the time had a paid email service but did not offer it in the app, with the ‌App Store‌ version being available for free.

For the first two years we were in the App Store, that was fine, no issues there," he says. (They'd launched on iOS in 2016.) "But a common practice we see ... as you start getting significant uptake in uploads and downloads, they start looking at your situation more carefully, and then as any good Mafia extortion goes, they come to shake you down for some money.

Apple apparently told ProtonMail "out of the blue" that it was required to add an in-app purchase option to stay in the ‌App Store‌. Similar to the situations with HEY and Wordpress earlier this year, ProtonMail had a mention of paid plans in the app, which prompted Apple to ask for the same subscription options to be offered via in-app purchase.

Yen says that ProtonMail complied in order to save its business, complaining that there's no way to get a "fair hearing" with Apple. ProtonMail was unable to update the app for a month-long period, and Apple threatened to remove the app from the store if the company did not comply.

They are judge, jury, and executioner on their platform, and you can take it or leave it. You can't get any sort of fair hearing to determine whether it's justifiable or not justifiable, anything they say goes.

Yen believes Apple's 30 percent fee harms privacy-centric apps because it's difficult for a paid app to compete with free apps like Gmail while also having to pay ‌App Store‌ frees.

Apple in September changed its App Store rules to avoid situations like the dispute with ProtonMail. Apps are now allowed to offer free standalone apps that are companions to paid web-based tools without an in-app purchase requirement, and there's also a new process that lets developers challenge App Store rules and decisions.

Following Apple's ‌App Store‌ rule change, Yen told The Verge that ProtonMail plans to remove its in-app purchase options, but he's wary of Apple's new rules and will test out the changes on another app, ProtonDrive, ahead of time. Apple in a statement to The Verge said that it "doesn't retaliate against developers" and instead "works with them to get their apps on the store."

ProtonMail is one of the participants in the "Coalition for App Fairness," a group advocating for "freedom of choice and fair competition across the app ecosystem." Members include other companies disgruntled with Apple's ‌App Store‌ practices, including Spotify, Epic Games, Tile, and Basecamp (the makers of HEY).

Hurmoth
I thoroughly enjoy using Apple products, but I'm not beholden enough to any one tech company that I cannot see when they're in the wrong. Just like the Apple/Epic case, both sides are wrong for their actions.

Less fanboys and more level-headed thinkers is what we need in the world.
Score: 47 Votes (Like | Disagree)

The complaining and whining is meaningless when Yen does what he says he think is unreasonable. If you don’t like what Apple says, then do something different.

These after the fact cry babies are nothing but noise.

Apple changed the rules, there was no problem for a few years, so calling them cry babies is unfair imo.

For the first two years we were in the App Store, that was fine, no issues there," he says. (They'd launched on iOS in 2016.) "But a common practice we see ... as you start getting significant uptake in uploads and downloads, they start looking at your situation more carefully, and then as any good Mafia extortion goes, they come to shake you down for some money.

So, Yen wants Apple to provide distribution, promotion, hosting/CDN, dev tools, etc for his app but he wants it all for free, while monetizing the app outside the store?
Ok then, sure, no problem.

Everything you mentioned is covered by the dev fee, so it ain't all free. According to Yen, Apple was fine with the relationship until Proton Mail gained some notoriety and then came looking to cash in. Now how accurate is Yen's version? Idk, and Apple hasn't said anything one way or the other. They did change their policy. Read into that what you will. Regardless, your description of the situation remains inaccurate.
Score: 22 Votes (Like | Disagree)

The complaining and whining is meaningless when Yen does what he says he think is unreasonable. If you don’t like what Apple says, then do something different.

These after the fact cry babies are nothing but noise.

You either didn't read the article or didn't understand what you read. Apple has changed it's stance requiring IAP in the apps, so it's seems there was a bit more there than nothing but noise.
Score: 22 Votes (Like | Disagree)

Squuiid
So, Yen wants Apple to provide distribution, promotion, hosting/CDN, dev tools, etc for his app but he wants it all for free, while monetizing the app outside the store?
Ok then, sure, no problem.
Score: 20 Votes (Like | Disagree)
Read All Comments

Wednesday September 8, 2021 8:00 am PDT by Joe Rossignol
As a result of legal and regulatory pressures, Apple recently announced some upcoming changes to its App Store policies, such as letting developers email customers about payment options available outside of their iOS app and allowing "reader" apps like Spotify and Netflix to include an in-app link to their website for account signup. Apple said the changes "will help make the App Store an...
Read Full Article • 54 comments