Apple is requiring the WordPress for iOS app to implement in-app purchase options for its .com plans, and prevented the app from getting updates until the development team agreed to add the feature, WordPress developer Matt Mullenweg said on Twitter today. 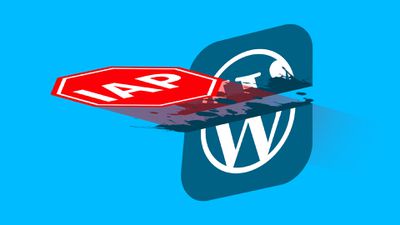 Mullenweg says the WordPress iOS App was "locked" and to push updates and bug fixes, the company had to agree to add support for in-app purchase plans. There was an update released 19 hours ago after three weeks of no updates, so it appears WordPress has committed to introducing Wordpress.com in-app purchase options.

Heads up on why @WordPressiOS updates have been absent... we were locked by App Store. To be able to ship updates and bug fixes again we had to commit to support in-app purchases for .com plans. I know why this is problematic, open to suggestions. Allow others IAP? New name? — Matt Mullenweg (@photomatt) August 21, 2020

WordPress.com offers several paid plans for WordPress.com hosting, priced from $4 per month to $45 per month based on features, storage, support, and other parameters. There are also enterprise options that start at $1,700 per month.

WordPress is a website platform that is the backbone for many websites on the internet. It's a free, open source tool that anyone can use and customize to meet their needs. WordPress.com, meanwhile, is a separate hosting service with the aforementioned paid plans.

New name: The app has always done a ton of work to support WordPresses hosted anywhere, using the XML-RPC API included in core WP since WP 2.6 was released in 2008. That's why we called it "WordPress" and not "https://t.co/lj1vCfp4UL" or "Jetpack." — Matt Mullenweg (@photomatt) August 21, 2020

Allow others IAP: All of the code is open source, if other hosts or plugins wanted to support in-app purchases for their plans we could accept patches and have Automattic pass through the revenue. https://t.co/yJYUG6wQLL — Matt Mullenweg (@photomatt) August 21, 2020

According to Apple's App Store Review Guidelines, apps that offer access to paid digital content or services need to use the in-app purchase system. Apps that operate across several platforms can let users access content, subscriptions, and features that they've paid for outside of the ‌App Store‌ (like on WordPress.com), but Apple's rules say those items must also be available as in-app purchases in the iOS app.

Apple told MacRumors that it approved the latest update of the WordPress app and is working with WordPress to bring the app into compliance with the ‌App Store‌ Review Guidelines.

Apple's request that WordPress implement in-app purchases comes as Apple faces scrutiny from antitrust regulators over its ‌App Store‌ purchase policies, and amid a fierce fight with Epic Games over in-app purchase fees.

Update: As it turns out, the WordPress app was in violation of Apple's ‌App Store‌ policies because there were references to upgrading to paid plans within the app's help system that linked to the WordPress plan option on the web, something which was not made clear when reports about the WordPress app being forced to implement in-app purchases came out.

According to Apple, it asked WordPress to add in-app payment options because there was a payments plan section that did not include in-app purchases. Apple and WordPress have now come to an agreement that has seen WordPress remove payment option references from the app, so it is now in compliance with the ‌App Store‌ rules.

Apple in a statement said that the issue with the WordPress app has been resolved:

We believe the issue with the WordPress app has been resolved. Since the developer removed the display of their service payment options from the app, it is now a free stand-alone app and does not have to offer in-app purchases. We have informed the developer and apologize for any confusion that we have caused.

Sure, why not. It would give us a sense of the scope of the issue for developers and major companies like Wordpress. As a consumer with my foot in the door to multiple platforms, I am interested in seeing where the future of the App Store is going. It was a rude shock for Fortnite players to wake up and find that their investment in the iOS version of the game is totally gone.

I don’t play Fortnite but what about the other apps I do use? Are we seeing stirrings of a rebellion that will quickly be put down and all will continue as it has always been? Or will contributors to the App Store start abandoning it?

I am not going to keep putting money into iPhones and Apple Watches and iPads if the app ecosystem dries up. That’s the reason I didn’t buy a Windows phone despite finding them very interesting.

I don’t think Apple will lose the App Store overnight but I am interested in spotting a trend as it starts.
Score: 66 Votes (Like | Disagree)

Who in there right mind would use WordPress anyway?

Only majority of internet, Apple partly included. Just because you can't use it and seemingly even don't want to based on the way you reacted, it doesn't mean everyone else is wrong on their mind.
Score: 53 Votes (Like | Disagree)

jjdodders
The greed jumped out. To expect a 30% cut of ALL online subscription services that have an iOS app is way too much.
Score: 37 Votes (Like | Disagree)

JPack
Really shows the extent of the issue. Developers aren't eating all the costs. Consumers are the ones that end up paying more to support Apple.
Score: 33 Votes (Like | Disagree)

The can was opened.
Next stop gov regulations cause I don't think apple will budge. Shareholders wouldn't be happy.
Score: 20 Votes (Like | Disagree)
Read All Comments