Shipments of Apple's higher-end AirPods Pro wireless earbuds are expected to equal those of its second-generation AirPods by the end of the year, according to industry sources (via DigiTimes). 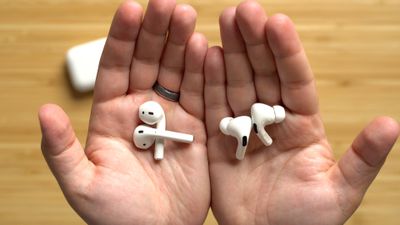 Apple's shipments for AirPods Pro have been growing steadily since its launch in October 2019, likely to equal those of AirPods 2 by the end of 2020, an encouraging development for SiP substrate suppliers including Taiwan's Nan Ya PCB and Korean makers, the sources said. SiP is likely to become the mainstream technology for AirPods, the sources continued.

Those new features inevitably came with an additional cost, with ‌AirPods Pro‌ priced at $249, compared to second-generation AirPods starting at $159. That hasn't put off consumers, however. Indeed, Apple accounted for nearly half of all sales of true wireless earbuds in 2019, and those sales are expected to grow to 82 million units this year, according to Counterpoint Research.

According to Apple analyst Ming-Chi Kuo, who often reliably predicts Apple's product plans, Apple is working on a second-generation version of the ‌‌AirPods Pro‌‌ that will go into mass production into the fourth quarter of 2021 to the first quarter of 2022, suggesting no ‌‌AirPods Pro‌‌ refresh in 2020 or early 2021.

Kuo has also said that Apple is working on a third-generation version of its lower-end ‌AirPods‌, for a planned rollout in the first half of 2021. The new AirPods are expected to feature a form factor design similar to ‌AirPods Pro‌, thanks to a more compact system-in-package (SiP) that allows the audio features to be integrated into a more compact casing.

In the meantime, existing AirPods 2 and ‌AirPods Pro‌ owners have more to look forward to with the official release of iOS 14 and macOS Big Sur, when AirPods 2 and ‌AirPods Pro‌ will gain an automatic switching function between Apple devices. For example, if you finish a phone call on your iPhone and pick up your iPad to watch a movie, the AirPods will automatically switch over.

‌AirPods Pro‌ are also getting a new "spatial audio" feature that promises to deliver a theater-like surround sound experience wherever you are. Apple says spatial audio with dynamic head tracking puts surround sound channels in exactly the right place, even as you turn your head or move your device. This feature will require an ‌iPhone‌ 7 or newer.

How do people NOT lose at least one of those every 6 months?

We aren't all as irresponsible as you, I guess.
Score: 8 Votes (Like | Disagree)

JosephAW
Still prefer on ear vs in ear for daily use.
Score: 7 Votes (Like | Disagree)

Never buy these disposable earphones. Instead go for any over the head Bose or Sony cans which will last longer with better battery life and longevity.

Which pair of over the head cans do you recommend, that I can fit easily in my pocket?
Score: 6 Votes (Like | Disagree)

randyhudson
Shipments would have to be high to replace all of the failing units. I’m about to send one of mine back for the 5th time.
Score: 3 Votes (Like | Disagree)

Have my AirPods Pro. Don’t love them. Between rattlegate, they dropping out whenever you exercise, etc probably wish I hadn’t given up my AirPods 2

I’ve been feeling the same way about giving up my Air Pods 2. The Air Pods Pro keep falling out of my ears even though I’ve changed the tips. I’m using the smallest size which is the best fit out of the 3.
Score: 2 Votes (Like | Disagree)

JCCL
Have my AirPods Pro. Don’t love them. Between rattlegate, they dropping out whenever you exercise, etc probably wish I hadn’t given up my AirPods 2
Score: 2 Votes (Like | Disagree)
Read All Comments