Apple will grow its share of the true wireless earbuds market by a third this year, despite losing its dominant position in the space to more affordable alternatives, according to Counterpoint Research (via Bloomberg). 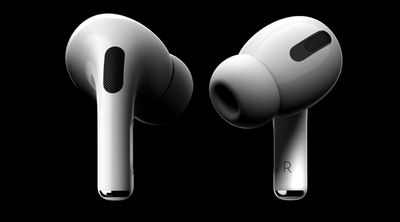 Apple accounted for nearly half of all sales of true wireless earbuds in 2019 and is expected to grow to 82 million units this year, according to the report. However, its lead has been eroded by the arrival of Chinese rival brands, shrinking its share to just over a third of the market (35%). Xiaomi remains in second place with 10%, while Samsung sits in third with a 6% share.

According to the report, specialized Chinese brands like the $90 Lypertek Tevi offer comparable performance to Apple's AirPods at a lower price, while the $180 1More True Wireless ANC rival the noise-canceling smarts of AirPods Pro, which cost $250. Samsung's new Galaxy Buds Live are also ANC-equipped and come in at under $170.

"The low-to-mid end segment including Chinese brands and U.S. makers such as JLab is taking away share from the premium market," said Counterpoint analyst Liz Lee. "Competition between Samsung and Apple is likely to intensify in the latter half of the year, as positive reviews of the Buds Live and increased investment from Samsung are expected to close the gap between the two," she added.

Samsung is projected to more than double its true wireless earbuds sales this year, growing from 8 million to 17 million, while Apple’s AirPods family is forecast to go from 61 million to 82 million.

Apple is rumored to be working on a third-generation version of the AirPods, although Apple analyst Ming-Chi Kuo has said that third-generation AirPods won't be coming in 2020, with mass production to begin in the first half of 2021.

The third-generation AirPods are expected to adopt a more compact integrated system-in-package (SiP) that's similar to the SiP used in the ‌AirPods Pro‌, which will allow the audio features of the AirPods to be integrated into a casing more similar in design to the ‌AirPods Pro‌. Current AirPods use surface-mount technology (SMT).

DigiTimes has referred to these entry-level earbuds as the "AirPods Pro Lite," and claims that Apple originally planned to launch these new AirPods in early 2020, but has postponed them until the second half of 2021.

According to Apple analyst ‌Ming-Chi Kuo‌ these "‌AirPods Pro‌ Lite" or "AirPods X" earbuds that might be launching in September or October aren't AirPods at all, but are instead headphones in the Beats family.

yurc
One of my favorite.

Mc0
Because they are disposable tech. After a year of use my left airpod is dead after 30mins use.
Score: 31 Votes (Like | Disagree)

As far as i'm concerned and from what i see around there is no competition.

You are not looking any further than Apple then, there is no way you can say there is no competition to Air Pods.
Score: 17 Votes (Like | Disagree)

ani4ani
To be honest, the whole world is being mugged by all of these expensive branded units. I had the Sony's which were brilliant [actually quite amazing], but I forgot them for a trip and so in desperation I purchased an unbranded cheap pair for overnight delivery on Prime. [about 10% of the cost]. They are 95% as good as the Sony's, range and battery life stunning. Sound quite amazing for the cost. None of these branded units can justify their cost.
Score: 16 Votes (Like | Disagree)

JoelTheSuperior
Not really surprising - when the AirPods launched there was really nothing like them on the market, whereas now there's quite a lot of (genuinely rather good competition).

I still love my AirPods and in truth I'd probably buy them again, but the landscape is definitely very different to how it was when they launched.
Score: 14 Votes (Like | Disagree)

LarryJoe33
I gotta say, I have had my APP for 8 months. The right one has been replaced twice and the left once. They don't have longevity and the sound degrades with distortion and static. I listen to mine loud and it clearly reduces the life of the internal drivers.

I did get Apple Care+, but that makes these close to $300 with tax or $150 a year under warranty. I would not think twice about quality cheaper alternatives if these are throw-aways after warranty expires.
Score: 9 Votes (Like | Disagree)
Read All Comments