Alongside new iPhones each year, Apple unveils an updated version of the Apple Watch, introducing new features and improving on existing functionality. We're expecting the sixth-generation Apple Watch in 2020, and we could perhaps see some useful new health tracking functionality.

Subscribe to the MacRumors YouTube channel for more videos.
The most notable new feature we could see in Apple Watch Series 6 models is blood oxygen monitoring, which would allow the Apple Watch to detect and monitor the oxygen levels in the blood. Normal blood oxygen is between 95 and 100 percent, and when blood oxygen levels drop, it can be indicative of a health problem that needs immediate medical attention.

Code in iOS 14 suggests that Apple will provide notifications when blood oxygen levels drop below a healthy threshold, allowing Apple Watch owners to get quick help when affected by a respiratory or cardiac problem. Blood oxygen monitoring would be a useful feature amid the ongoing pandemic, as the virus can cause oxygen levels to drop, and people experiencing reduced oxygen intake need emergency help. 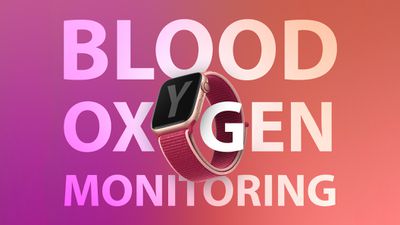 We're expecting some new hardware in the Apple Watch Series 6, including a new system-on-a-chip for performance improvements. There may be an improvement in water resistance and improved wireless transmission for faster WiFi and cellular speeds.

We've seen a battery allegedly for the Apple Watch that features a capacity of 303.8mAh, which is not too far off from the 296mAh battery in the Series 5 models, so we're not expecting significant gains in battery life other than what comes through software improvements.

There have been some murky rumors about mental health capabilities that would let the Apple Watch Series 6 detect panic attacks or high levels of stress and provide breathing exercises to calm people down.

If this feature exists, it could rely on heart rate data or it could take into account blood oxygen levels as well as breathing rate to make determinations about stress levels.

New Apple Watch models have always released alongside iPhones in the past, but the 2020 launch dates are unclear given the iPhone delays. Leaker Jon Prosser, who has something of a mixed track record, believes Apple will introduce the Apple Watch via press release next week, well ahead of when new iPhones launch.

Since Apple has never decoupled Apple Watch launches from ‌iPhone‌ launches, it's not clear if this information is accurate, but we don't have long to wait to find out. If an Apple Watch launch doesn't happen next week, Japanese site Mac Otakara believes the Series 6 will be unveiled at an October event alongside the iPhone 12 models.

Apple in late August registered eight new Apple Watch models with the Eurasian Economic Commission, a filing that's required ahead of any new product release. Oftentimes these filings herald an upcoming product launch, so there are definitely new models on the horizon.

For more on what to expect from the Apple Watch Series 6, make sure to check out our roundup.

O2 saturation would come in handy to roughly gauge fitness and lung performance over extended exercising. It would be a nice, good-to-know, feature.

As an anaesthesiologist, I would have to disagree with that statement. Oxygen saturation does not gauge fitness or lung performance. Well, not in the way you are thinking. If your oxygen saturation is below 95% regardless of any setting may indicate there could potentially be pathological VQ mismatch.

To gauge performance then you would be looking at more like vo2 max which could actually be estimated using the heart rate ratio without any need of pulse oximetry;
VO2 max ~ hr max/hr rest x 15.3 mls/kg/min
There are also other ways of estimating VO2 max.

Other things one could look at are things like aerobic or anaerobic threshold.
Score: 23 Votes (Like | Disagree)

jav6454
O2 saturation would come in handy to roughly gauge fitness and lung performance over extended exercising. It would be a nice, good-to-know, feature.
Score: 18 Votes (Like | Disagree)

im2fast4u
Let's wait and WATCH... next week or next month
Score: 17 Votes (Like | Disagree)

jlocker
Can not believe that my Apple Watch version 1 is still running from the original launch of the watches. I think it is time to upgrade :)
Score: 14 Votes (Like | Disagree)

I appreciate you taking the time to inform us on the merits (or rather lack thereof) that many of us have misconstrued. I hope you will continue to do so as time permits.
Score: 11 Votes (Like | Disagree)
Read All Comments