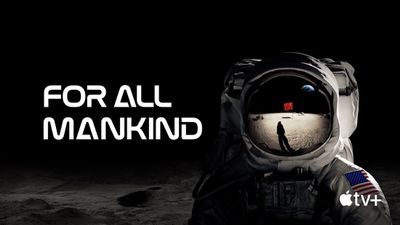 The new feature is said to take aspects of scenes in a TV show, such as characters or objects, and display them on the viewer's iPhone or iPad so they can be seen as if they existed in the user's surrounding environment.

For example, someone watching a moon-walking scene in the Apple show "For All Mankind" might be able to see a virtual lunar rover on their device’s display, seemingly perched atop their living room coffee table. The option would serve as bonus content akin to the director commentary or trailer that accompany a movie download and would be accessed from Apple's TV app on the iPhone or iPad.

The AR feature is expected to debut next year, ahead of an Apple headset in 2022 that will be built around augmented and virtual reality, said the people, who asked not to be identified because they weren't authorized to discuss the plan publicly.

Gurman says that Apple intended to release the AR feature for ‌Apple TV+‌ later this year, but the impact of the global health crisis pushed back the launch. Gurman's sources also cautioned that Apple could decide to ditch the plan entirely.

According to Bloomberg and other sources, Apple will debut laser-powered time-of-flight 3D cameras in its upcoming iPhone 12 lineup that promise significant improvements to AR experiences‌. The cameras are thought to be similar to the LiDAR Scanner feature that Apple added in the 2020 iPad Pro models. AR remains chronically underused, however, because Apple currently only offers two of its own AR features – Animoji and the Measure app – and relies on third-party app developers to provide additional AR utilities and experiences using its ARKit framework.

Looking further ahead, multiple rumors point to Apple's augmented reality headset being released in 2022, and a recent report claimed Apple and Foxconn have reached a key milestone in the development of the long-rumored AR headset, with the semitransparent lenses for the device moving from prototype to trial production.

An earlier report from Bloomberg's Gurman indicated that Apple's AR and VR projects have been hampered by internal divisions over whether Apple should emphasize graphics and processing power in a design that would connect wirelessly to a nearby hub or a more personal approach with lesser capabilities but which can be contained entirely within the headset.

Apple is said to have multiple AR and VR projects in the works beyond the initial headset, known by the code name of N301, with a sleeker pair of AR glasses known as N421 that could launch in 2023. For everything we know on Apple's AR/VR plans, be sure to check our dedicated roundup.

ArtOfWarfare
Remember yesterday when I said if you wanted to make a company that beat Apple I said you needed to make an AR product with useful killer apps that beat back soulless crap from Apple, Google, and Microsoft?

This is the soulless crap I was talking about. Apple isn’t in it because it’s a good idea - they’re in it because they don’t have a clue what to do with AR. They’re in this field waiting for someone else to show what to do, then they’ll try copying. Remember to lawyer up when you start your company - you’ll want investors with deep pockets to help you fend off Apple.
Score: 7 Votes (Like | Disagree)

Duncan-UK
All of which seems designed to pull the viewer away from the programme as opposed to immersing them in it. It sounds like a dreadful gimmick dreamed up by a marketing team desperate to justify their existence.

AR is a solution desperately looking for a problem.
Score: 6 Votes (Like | Disagree)

This is the soulless crap I was talking about. Apple isn’t in it because it’s a good idea - they’re in it because they don’t have a clue what to do with AR.

People said this about the iPhone, iPad, and then the Apple Watch.
Score: 5 Votes (Like | Disagree)

Every show that Apple has, save for "Snoopy in Space," has scored under 75% on Rotten Tomatoes. Not exactly banging. Disney+'s premiere show "The Mandalorian" has a rating of 93% and "Hamilton" (which was out there for anyone to snag, but Disney thought of it) got 98%. But, keep telling me about quantity over quality.

Those are the first four i looked up.
Score: 3 Votes (Like | Disagree)

When your content stinks give them a gimmick. For example, most of the movies that incorporated Sensurround were pretty lousy films.

"The success of Star Wars over Rollercoaster in the middle of 1977 demonstrated to theater operators the limits of Sensurround as a guarantor of audience draw" - Sensurround entry, Wikipedia

You don't see Disney+ needing to offer a gimmick to get 60+ million users. Offer great content at a fair price. It's that simple.

Except Apple's content doesn't stink. Disney+ doesn't need to offer bonuses like this because they have a massive back catalog. Apple doesn't have that luxury, so they are adding this to artificially inflate the limited TV+ offerings.

So, the motivation is quantity, not quality. Because Apple has put out some serious bangers, with only a handful of duds.
Score: 2 Votes (Like | Disagree)

satchmo
Admittedly, I've not seen the true benefits of AG for everyday users. It has always seemed to be for those in the interior design space.

However, this news is intriguing. By bringing AG into AppleTV+, there are some interesting possibilities. For instance, in a murder mystery, it could allow closer inspection of evidence in 360 degree. Perhaps users can determine outcomes based how they interact with objects.

If done right, and they can weave interactivity into the plot, it could herald a new wave of storytelling.
Score: 2 Votes (Like | Disagree)
Read All Comments

Sunday January 23, 2022 10:32 am PST by Juli Clover
Apple is working on a number of new products that are set to launch this fall, and Bloomberg's Mark Gurman says that it will be "the widest array" of new devices that Apple has introduced in its history. In his latest "Power On" newsletter, Gurman explains that Apple is working on four new flagship iPhones (iPhone 14, iPhone 14 Max, iPhone 14 Pro, and iPhone 14 Pro Max), an updated low-end Ma...
Read Full Article • 262 comments