Apple today seeded the fourth beta of the upcoming macOS Big Sur update to developers for testing purposes, two weeks after releasing the third beta and over a month after the new update was unveiled at the Worldwide Developers Conference. 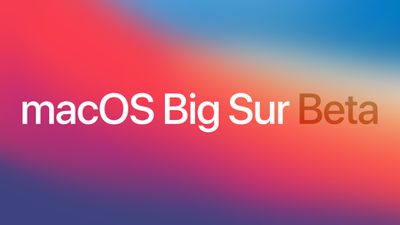 The Notification Center has been redesigned with iOS-style widgets that are available in multiple sizes, plus there are more interactive notifications that are now grouped by app to make it easier to see what's going on.

Safari is faster and more battery efficient, plus there's a new start page that can be customized with wallpapers and sections that include Reading List and iCloud Tabs, which makes Safari more tailored to your individual usage needs.

Tabs have been redesigned, there's a built-in language translation feature, and Chrome and Firefox Extensions can be ported to Safari. There's also an option to choose which sites an extension works with for greater privacy. Speaking of privacy, a new Privacy Report feature lets users know the trackers Safari is blocking when you visit websites.

Today's beta adds 4K support for YouTube videos in Safari. For more on everything that's new in macOS Big Sur, make sure to check out our roundup.

avtella
With a sad heart I can confirm 4K YouTube works in Safari, gone are the days I could enjoy peoples screams and suffering on the internets, at the lack of 4K YouTube. Guess I need to find a new purpose in life now.
Score: 15 Votes (Like | Disagree)

BanjoDudeAhoy
What I’m really looking forward to is an article that has the word combinations “Big Sur”, “public beta” and “now available” in its title.
Ideally in that sequence.
Score: 11 Votes (Like | Disagree)

Goldfrapp
Are we still all living in Cupertino?
Score: 9 Votes (Like | Disagree)
Read All Comments