Images emerged on Chinese social media platform Weibo over the weekend purporting to show display panels for Apple's upcoming "iPhone 12" lineup. The images also appeared briefly on Slashleaks before being taken down on Monday. 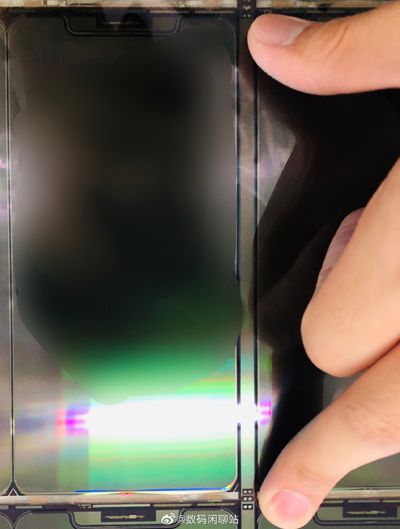 The photos depict what looks like several packed rows of smartphone panels from an assembly line. At first blush, the panels seem to have the same notch size as the iPhone 11, but an improved screen to bezel ratio, although it's possible this could just be down to their pre-assembly appearance.

That said, despite the hand in the image, it's not immediately obvious from the photos which size of ‌iPhone 12‌ that the panels are supposed to be destined for. Weibo blogger Digital Chat Station claims they are for the 5.4-inch model, which could suggest we're looking at a smaller notch than the one on the 5.8-inch ‌iPhone‌ 11.

According to Bloomberg, at least two of the high-end iPhones Apple plans to offer in 2020 will have the new design with flat, stainless steel edges instead of curved edges, reminiscent of the design of the iPad Pro.

We've heard conflicting rumors about the size of the notch on these new "‌iPhone 12‌" devices. Apple analyst Ming-Chi Kuo and Bloomberg believe that at least one new ‌iPhone‌ in 2020 will feature a smaller front camera lens for an improved screen to bezel ratio, ultimately resulting in a smaller notch at the front.

Leaked images said to depict the ‌iPhone 12‌ have also pictured a notch that is approximately 1/3 smaller than the current notch on iPhones. Meanwhile alleged ‌iPhone 12‌ schematics that surfaced in April have suggested Apple will implement a smaller notch by integrating the front speaker for the device into the bezel. The updated hardware layout also features the ambient light and proximity sensors moved to a more central position within the TrueDepth camera system.

However, other alleged leaked CAD images have suggested Apple's new devices will have the same size of notch and triple-lens camera layout as found on the current ‌iPhone‌ 11 Pro series. CAD images of unreleased iPhones shared online are usually presented as official designs leaked from production factories, but are often made by case makers themselves to predict the design of unreleased devices.

According to The Wall Street Journal, Apple plans to launch its ‌iPhone 12‌ lineup in 2020, but mass production on the devices will be delayed for around a month.

Apple supplier Broadcom believes the 2020 ‌iPhone‌ models will be delayed for several weeks, and will launch later than usual in the fall.

newyorksole
I personally don’t mind the notch at all and think it gives the iPhone a unique look. It would be nice if it was smaller, but it is what it is.

I do hope we at least get a version of the ProMotion Display.

FaustsHausUK
Nobody has given a meaningful answer to why we even need the notch. Just give the phone a small forehead, put all relevant sensors in there and keep the screen an unbroken rounded rectangle. It’s got to be easier to manufacture, simplifies the software, and will enable more future sensors in that space.
Score: 17 Votes (Like | Disagree)

”We have kept the same notch, disabled 120hz, shrunk the battery, and not included the charging brick. It’s our least exciting iPhone offer ever, and we think you’re gonna love it!”
Score: 17 Votes (Like | Disagree)

supergt
Where are the leaks of the exquisite boxing we were promised?
Score: 17 Votes (Like | Disagree)

I personally don’t mind the notch at all and think it gives the iPhone a unique look. It would be nice if it was smaller, but it is what it is.

OnePlus 7T notch is the most aesthetic notch of all. I find Punch hole even more offensive than notch.

farewelwilliams
here comes the people complaining about how the notch still sucks and they will hold off until apple removes the notch (which they never will)
Score: 14 Votes (Like | Disagree)
Read All Comments