Apple today seeded the final betas of upcoming iOS and iPadOS 13.6 updates to developers, a week and a half after seeding the third betas and over a month after releasing iOS/iPadOS 13.5 with Exposure Notification API, Face ID updates, Group FaceTime changes, and more. 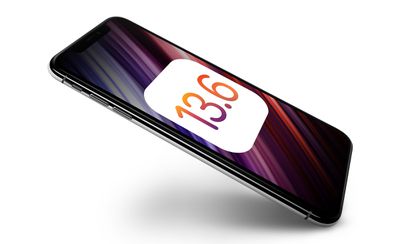 iOS and iPadOS 13.6 can be downloaded from the Apple Developer Center or over the air once the proper developer profile has been installed.

Though the feature is not live yet, iOS and iPadOS 13.6 include new Apple News+ Audio feature, which will see Apple offering some news stories in an audio capacity.

Code in iPadOS 13.6 also suggests Apple is working on keyboard shortcuts that will allow users who have a Magic Keyboard or other attached keyboard to adjust the brightness level of the keys, but it's not clear if this will be a feature included in the update. Apple's GM version of iOS 13.6 has the full release notes for the update:

iOS 13.6 is likely to be one of the last versions of iOS 13 that Apple will release as focus shifts to iOS 14, set to be released this fall.

m00f
Hope it fixes all the bugs in 13.5.1 Ever since upgrading my iPhone7 has felt 3 generations older.. extreme battery drain, phone heating up for no apparent reason, frequent app crashes, data and apps constantly being pushed out of memory. It’s the worst, buggiest version of iOS I’ve ever used. Also plaguing my iPad Pro with charging issues
Score: 7 Votes (Like | Disagree)

sauria
Hopefully this fixes the battery drain issue while iOS 13.5.1 is off.
Score: 4 Votes (Like | Disagree)

Before updating to anything Apple
I will wait to see the disasters associated with it
I never had all the issues I'm having with 13.5.1
I even had my iPad replaced, not because I asked for but the senior engineer insisted after a diagnostic test...it tells you all!

I expected major issues with all the hastily cobbled together code for the virus tracking. Who knows what they're doing with all the various radios. Obviously not Apple lol. Trashed battery and overheating was to be expected.

No way I'm updating from 13.4 ever. I don't care what BS feature and emoji gets added any more.
Score: 2 Votes (Like | Disagree)

To testers, do you know if this Golden Master addresses the extreme battery drain that users have been experiencing since iOS 13.5.1?

On my max battery life has been pretty good across the life the 13.6 betas. Of course this is anecdotal and the next person could come around and state the opposite.
Score: 1 Votes (Like | Disagree)

Before updating to anything Apple
I will wait to see the disasters associated with it
I never had all the issues I'm having with 13.5.1
I even had my iPad replaced, not because I asked for but the senior engineer insisted after a diagnostic test...it tells you all!
Score: 1 Votes (Like | Disagree)
Read All Comments