The iOS 13.6 beta, which is currently in testing, introduces an Apple News feature that's designed to save your place in an article when you start reading something and then exit out of the article or the app. 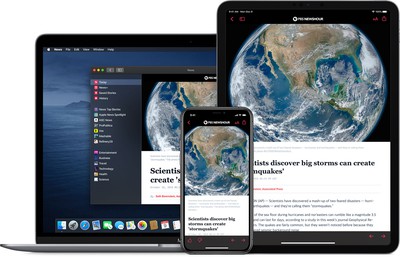 In iOS 13.5.1 and earlier, if you exit out of an article while reading it and then attempt to return to that same article later, the ‌Apple News‌ app automatically starts back at the beginning of the article. In iOS 13.6, it opens back up to the place that you left off so you don't need to scroll down to find the portion of the article you were last reading.

As noted on the MacRumors forums, it takes about thirty seconds for the ‌Apple News‌ app to register and save your position in an article before it's safe to exit out. This isn't a feature that's needed for short articles that you read right away, but for longer content, such as ‌Apple News‌+ magazine articles, it's a welcome change.

The iOS 13.6 update also appears to be laying the groundwork for an ‌Apple News‌+ audio feature that will see Apple offering audio versions of some ‌Apple News‌ stories. Audio is not enabled at this time, but it looks like it's a feature Apple plans to launch in the near future.

Along with these ‌Apple News‌ changes, iOS 13.6 includes a toggle that offers more granular control over the downloading and installing of iOS updates and it adds a new Symptoms section to the Health app.

iOS 13.6 is in beta testing and is limited to developers and public beta testers at this time, but the new features will be available to everyone when it sees a public release.

now i see it
This is a welcome feature for the 500 people using apple news
Score: 25 Votes (Like | Disagree)

mnsportsgeek
I'm glad they prioritized this over fixing the mail app.
Score: 12 Votes (Like | Disagree)

Deliro
Any other app/platform this would be a single line entry in the release notes.
Score: 12 Votes (Like | Disagree)

trigf
I hope iOS 13.6 will also correctly mark articles as Apple News+ exclusives. So tired of clicking on links that are behind a paywall, with no indication they are.

Also I'm tired of seeing "curated" content that is nothing more than lists of items that are sponsored posts. I chose food as my interest, not "148 Gadgets That Are On Sale Right Now!" Ads between ads.
Score: 12 Votes (Like | Disagree)

MattLeidholm
There are a few reasons I canceled my News+ subscription after the free trial, but this issue was definitely number one. They claimed to "love magazines" during the intro, but if I'm going to read a 15000-word New Yorker profile on my phone, I can't lose my place just because I sent a couple of text messages.
Score: 10 Votes (Like | Disagree)
Read All Comments

Thursday July 22, 2021 3:22 pm PDT by Juli Clover
iDOS 2, an app designed to allow users to play classic DOS games, will soon be pulled from the App Store, the app's creator said today. According to iDOS developer Chaoji Li, he tried to submit an iDOS update with bug fixes to the App Store, but was told that the update was rejected because it violated the 2.5.2 App Store guideline that says apps cannot install or launch executable code.Durin...
Read Full Article • 224 comments