Apple's iPhone sales dropped eight percent in the first quarter of 2020, according to new data shared today by Gartner. 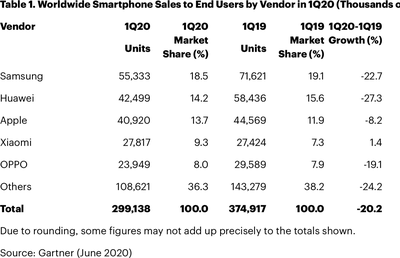 Apple sold an estimated 40.92 million smartphones during the quarter, a 3.7 million drop from the 44.57 million that it sold in the first quarter of 2019.

"The coronavirus pandemic caused the global smartphone market to experience its worst decline ever," said Anshul Gupta, senior research analyst at Gartner. "Most of the leading Chinese manufacturers and Apple were severely impacted by the temporary closures of their factories in China and reduced consumer spending due to the global shelter-in-place."

Apple in early February was forced to close all of its retail stores in China, and later in the year, the rest of its stores across the world were shuttered amid the global pandemic.

Stores in China started reopening in late February, and by mid-March, all retail locations in China were operational, just in time for Apple's other stores to shut down on March 14.

Apple has been slowly reopening its stores outside of China since the beginning of May and while not all locations have reopened, close to 100 stores in the U.S are open for repairs and pickups, plus stores in countries like Australia, Canada, Italy, and Germany have reopened.

"Apple had a strong start to the year thanks to its new product line up that saw strong momentum globally. If COVID-19 did not happen, the vendor would have likely seen its iPhone sales reached record level in the quarter. Supply chain disruptions and declining consumer spending put a halt to this positive trend in February," said Annette Zimmermann, research vice president at Gartner. "Apple's ability to serve clients via its online stores and its production returning to near normal levels at the end of March helped recover some of the early positive momentum."

calzon65
With Samsung and Huawei down 23% and 27% respectively, Apple's much smaller drop of just 8% is impressive.
Score: 12 Votes (Like | Disagree)

jjdodders
Oh no. How will this multibillion dollar company cope?
Score: 6 Votes (Like | Disagree)

Oh no. How will this multibillion dollar company cope?

How will this trillion dollar company cope? There, I fixed it for you.

Not surprised fewer want to buy a new $400-$1200 smartphone when they’re all sitting at home with nobody to show it off to. Especially if you lost your job and need to save money. The fast upgrade cycle thing is definitely about the status symbol of having the newest and most expensive. It’s like jewelry. There’s really no reason to buy a new iPhone more often than once every 3-4 years unless you break it or lose it. Still on iPhone 7 and sticking with it for a while longer, though I planned to buy the SE before the pandemic hit. Maybe later this year, or next year.

iPhone sales were down 8% while the overall market was down 20%. That means people are still buying $400-$1200 smartphones while the cheap end of the market collapsed.
Score: 6 Votes (Like | Disagree)

Who said anything about the USA? These are *world wide* sales figures. It might surprise you to learn that the USA is not the world you know.
Score: 5 Votes (Like | Disagree)

Not surprised fewer want to buy a new $400-$1200 smartphone when they’re all sitting at home with nobody to show it off to. Especially if you lost your job and need to save money. The fast upgrade cycle thing is definitely about the status symbol of having the newest and most expensive. It’s like jewelry. There’s really no reason to buy a new iPhone more often than once every 3-4 years unless you break it or lose it. Still on iPhone 7 and sticking with it for a while longer, though I planned to buy the SE before the pandemic hit. Maybe later this year, or next year.

You are right, especially for phones closer to the $1,000+ price. I kept my 6s for years and recently purchased the new 2020 SE. I'm thrilled with the new SE, it's a great form factor (size) and a fantastic value; I think it will be a big hit for Apple.
Score: 5 Votes (Like | Disagree)

magicschoolbus
Sales will be down across the board for every company so it's really no surprise. I also think we have reached peak smartphone. Not really anywhere to go from where we are at other then fancy cameras and faster processors.
Score: 3 Votes (Like | Disagree)
Read All Comments