Apple has now reopened 29 of its 42 retail locations in China, according to Apple's store websites in the country that were reviewed by Bloomberg. Many of Apple's stores in China have been shut down for the last few weeks due to the COVID-19 coronavirus outbreak. 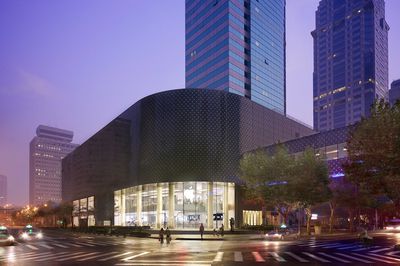 Most locations that have been reopened continue to operate on shortened hours, with some open for less than eight hours a day. Additional stores are expected to reopen as soon as this week, but there is no word on when all Apple Stores in China will be operational.

Apple last week said that its March quarter revenue will fall short of expectations because of constrained iPhone supplies worldwide and lower customer demand for Apple products in China caused by store closures.

The shuttered stores and limited hours have significantly reduced customer traffic, and though Apple's supplier factories in areas outside of the Hubei province have reopened, ramp up to full production on devices has been slower than expected.

According to a second report from Bloomberg, Apple's ‌iPhone‌ sales started dropping in January as the coronavirus spread. Numbers supplied by a UBS research note that includes official Chinese data suggests ‌iPhone‌ sales fell 28 percent compared to the prior month, which is a larger than normal decline for that time of the year.

February sales numbers are expected to be "far worse" due to supply and demand issues related to the outbreak.

Apple has said it is continuing to monitor the coronavirus situation and will provide additional information during its next quarterly earnings call in April.

Amazing how the media hype machine can whip up a panic over a flu virus. The media loves this btw. However Spring is right around the corner and with it goes the corona flu virus. Everyone is going to feel very silly in a few months for panicking over nothing

The bottom line is, when your Government:

* quarantines 50% of your population
* bans any travel, even down the street, without a permit
* marches quarantine violators to re-education camps
* runs two city cremation units at full capacity for weeks
* starts up 40 additional incinerators
* uses the military to run point on infection control
* stops nearly the entire workforce in half the country

...then the official story is nothing but propaganda lies. No country commits economic suicide for a "flu" virus that has killed a couple thousand people in a country of 1.7 billion.

This is a lot worse than what you are hearing.
Score: 47 Votes (Like | Disagree)

Easy to see it that way, but what about (a) customers needing support? (b) companies needing new equipment? ... there's lots of reasons to find a good balance in this situation beyond just making another dollar.

Corona is a flu virus without a vaccine. Only 2600 have died from it in China thus far. This last winter, since the flu vaccine was so bad, the CDC is estimating 40,000 dead from it. That should help keep things in perspective - it's not about preventing deaths, it's about preventing another common flu-type illness from being in the wild, and we're at that point. Every year the flu kills 20,000-50,000 in the US alone. If the press printed this tomorrow but didn't mention it was normal, there would be panic.

In 1918, 500,000 americans died from the flu. That's what the flu does to a population without a vaccine and proper treatment. So pull it together, it's not a big deal. Those that are dying probably had an underlying condition or were the very young and/or elderly.

Speaking of spreading misinformation, COVID-19 is NOT a "flu" virus.

Come back to us when you've learned a few more things. :cool:
Score: 14 Votes (Like | Disagree)

This virus has nothing to do with the transmission from the animal world to humans. The virus didn’t jump from a dead animal. It was released at the market to infect as many people as possible, but it didn’t originate there.
Once the epidemic is contained, we will learn that this was a terrorist attack with a biological weapon.

SCMP reported that genetic sequencing has proven that this virus didn’t cross into humans the way that the Chinese government claims.You can read that article for yourself.

If you’re going to make this claim, it’s incumbent on you to supply references to support it. What I’ve read says COVID-19 is 82% homologous to SARS and about 88% homologous to two different bat coronaviruses.

Where did you read that this is a terrorist attack? The claim is highly suspect.
Score: 7 Votes (Like | Disagree)

[AUT] Thomas
Questionable move... While a transmission should not occur if certain procedures are in place, they need to be carried out very strictly and precisely. I doubt it's worth it for non-essential goods.

The bottom line is, when your Government:

* quarantines 50% of your population
* bans any travel, even down the street, without a permit
* marches quarantine violators to re-education camps
* runs two city cremation units at full capacity for weeks
* starts up 40 additional incinerators
* uses the military to run point on infection control
* stops nearly the entire workforce in half the country

...then the official story is nothing but propaganda lies. No country commits economic suicide for a "flu" virus that has killed a couple thousand people in a country of 1.7 billion.

This is a lot worse than what you are hearing.

So, the first 3 are quarantine actions... nothing special there, at least not for China.
Next 2 items: In an epidemic it makes a lot of sense to burn all dead rather than conventional burrying. That alone will require at least double capacity. And yes, on top of that are the dead from the virus.
Even in western democrazy, use of military to perform certain tasks in a pandemic is very likely. Police and civil forces might not have capacity for that (or better things to do than the additonal security role). Also, the military does have equipment to deal with biological weapons, which come in handy during an epidemic.
Trying to contain the virus and thus stopping producton for a limited time is overall better than the alternative, especially when considering international reputation and recent history (SARS). Additionally, Chinese leadership is fearing to lose its face within the country if they fail on this. So, they can't handle it lightly regardless if it's 10%, 5% or 0.1% lethality. Last but not least the lethality of the virus highly depends on adequate healthcare. Those with sever symptoms often need a ventilator, some others might need other critical assistance. If you provide that, lethality seems to be around 1-3%. If you run out of capacity, lethality is likely much higher. As such it is vital to slow down the infection rate to a level at which it can be supported by the health care system. (Proper) Quarantine is helping a lot with that.
Score: 6 Votes (Like | Disagree)

len5
Never forget Apple does whatever China tells them to do. If China says open the doors then Cook orders them open. It's all about profits. Not sure why people still don't understand that.....
Score: 6 Votes (Like | Disagree)
Read All Comments