Twitter leaker Jon Prosser has shared a pair of images that appear to be schematics of Apple's unreleased "iPhone 12," showing a smaller notch than the one currently found on iPhones with Face ID.

The first image looks like a photo of a CAD illustration, which are sometimes leaked from Apple's supply partners. The second image appears to be based on the first schematic, and draws out the details of the hardware housed within the notch. 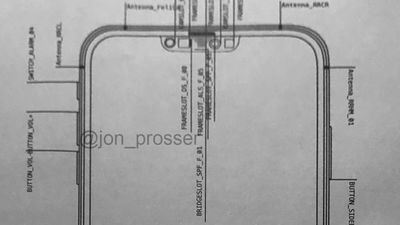 To achieve a more compact package, the redesigned hardware layout has the TrueDepth camera's ambient light and proximity sensors in a more central position within the array, with the iPhone speaker sitting above them in the bezel of the handset instead of between them.

Unlike Apple's marketing images of the hardware in the notch, the microphone is not pictured in either image. Prosser says it hasn't been labelled in order to emphasize the other hardware, and that it's actually housed next to the speaker.

Earlier this month, another leaker shared images said to depict the ‌iPhone 12‌ with a notch that is approximately 1/3 smaller than the current notch, but the images didn't reveal details of the hardware arrangement inside.

Apple analyst Ming-Chi Kuo was first to suggest that at least one new ‌iPhone‌ in 2020 will feature a smaller front camera lens for an improved screen to bezel ratio, ultimately resulting in a smaller notch at the front. More recently, sources close to well-connected Bloomberg reporter Mark Gurman have corroborated rumors of a slimmer notch.

We've heard rumors suggesting Apple eventually plans to debut an ‌iPhone‌ design that eliminates the notch entirely, but it's not entirely clear just how that would work as the front-facing camera still needs to be able to function even with some sensors under the display.

Apple supplier AMS last year announced new camera sensor technology that allows the RBG light and the IR proximity sensor used for the front-facing TrueDepth camera system to be embedded under an OLED display. It was thought that Apple could potentially introduce the new sensor tech in its 2020 iPhones to achieve the smaller notch, but that's not what today's alleged leaked schematics suggest.

Last June, one analyst with investment firm Credit Suisse in Asia said that Apple plans to offer notch-less iPhones with full-screen fingerprint authentication in 2021. However, the same analyst said Apple will launch one notch-less ‌iPhone‌ this year, and the rumor mill hasn't swung in that direction and it's unlikely to do so at this late stage in the yearly cycle. Regardless, Apple removing the notch on the ‌iPhone‌ is almost certainly its end goal.

However, the same analyst said Apple will launch one notch-less iPhone this year

A iPhone without a front camera would be handy. I just want a pocket iPad, never once used FaceTime or took a selfie.

I think you're in a small minority.
Score: 24 Votes (Like | Disagree)

austyn23
It´s only me or the smaller it is the uglier it becomes? lunarworks
Some of you are going to be complaining about the notch until the sun runs out of hydrogen. It's like Tim Cook came to your house and gave you a wedgie in front of your neighbours or something.

Yes, the camera will eventually go under the screen, but the tech isn't ready yet. If the tech was even close to ready, all of the Chinese manufacturers would be trying to rush half-baked implementations of it to the market. Think about it.
Score: 11 Votes (Like | Disagree)

Apple Knowledge Navigator
Crazy how much technology is packed into such a small space
Score: 10 Votes (Like | Disagree)

GreenLightLuke
I'll convince myself I'm not interested right up until 09:01 am as the Keynote starts.
Score: 9 Votes (Like | Disagree)
Read All Comments

Apple Seeds Fourth Betas of iOS 15.6 and iPadOS 15.6 to Developers