Austrian Apple supplier AMS today announced the launch of new sensor technology that could be incorporated into future iPhones to cut down on the size of the notch that houses the TrueDepth Camera System used for Face ID.

AMS has developed a new RGB light and IR proximity sensor that's designed to be installed behind a smartphone's OLED display, reducing the outside area required for these sensors. 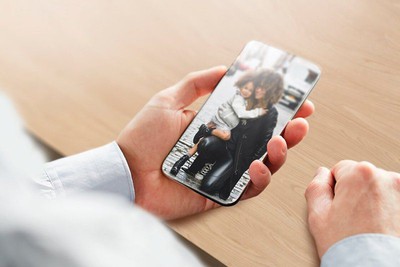 The company says that its new light and proximity sensor could perhaps result in the elimination of the bezel in its entirety.

"Smartphone OEMs today are striving to maximize their products' screen-to-body ratio, reducing the bezel area as much as possible on the display's face," said David Moon, Senior Marketing Manager at ams. "The TCS3701 enables phone designers to take this trend to a new level, potentially eliminating the bezel entirely. This is only possible because the TCS3701 can operate behind an OLED display, a breakthrough enabled by the outstanding sensitivity of the device and by the implementation of sophisticated measurement algorithms to compensate for the optical distortion caused by the OLED display."

According to AMS, the light and IR proximity sensor can sense ambient light passing through an OLED display, with unique algorithms developed to allow for accurate detection of ambient light without interference by the display's pixel brightness.

As noted by Reuters, AMS is the company that provides Apple with optical sensors for the TrueDepth camera system on the iPhone X, XR, XS, and XS Max. While AMS does not list Apple as a customer, analysts believe Apple accounts for approximately 45 percent of AMS' business.

Rumors have suggested that Apple is planning to introduce a smaller notch in its 2019 iPhones, and this new technology from AMS paves the way. We've also heard rumors suggesting Apple could debut an iPhone design that eliminates the notch entirely, but it's not entirely clear just how that would work as the front-facing camera still needs to be able to function even with some sensors under the display.

bpeeps
2019 iPhones are going to be exactly the same design with maybe a triple lens on the back. Bookmark me.
Score: 25 Votes (Like | Disagree)

Porco
I believe the notch is a design compromise Apple will get rid of as soon as they can.
Score: 15 Votes (Like | Disagree)

You're in a very, very VOCAL minority. The iPhone SE was cheap for Apple to produce because it was just a rehash of the iPhone 5. I doubt they're gonna spend the R&D to design a brand new 4.5" phone with all the new specs of the X series.

The iPhone SE is a 6S inside a 5S body; i.e., they just used a smaller screen. Yes, it is cheaper to use the older shell's blueprint and put newer chips inside.

I don't mind a the iPhone SE v 2.0 being an iPhone 8 inside the SE body; better still, a minimal edge SE with the iPhone X inside. The iPhone 5S body is a marvel to date.
Score: 12 Votes (Like | Disagree)

DrumApple
How about no Face ID or notch and in-display Touch ID instead? Thanks.
Score: 11 Votes (Like | Disagree)

Kanyay
if apple can find a way to put the camera module under pixels that can turn off or become clear somehow then we get a truly no bezel no notch phone.

I believe the notch is a design compromise Apple will get rid of as soon as they can.

We though so about the protruding camera as well...
Score: 9 Votes (Like | Disagree)
Read All Comments

Wednesday June 16, 2021 7:11 am PDT by Hartley Charlton
With no sign of redesigned MacBook Pro models at this year's WWDC, when can customers expect the much-anticipated new models to launch? A number of reports, including investor notes from Morgan Stanley and Wedbush analysts, claimed that new MacBook Pro models would be coming during this year's WWDC. This did not happen, much to the disappointment of MacBook Pro fans, who have been...
Read Full Article • 189 comments

Wednesday June 16, 2021 10:49 am PDT by Juli Clover
Apple CEO Tim Cook this morning participated in a virtual interview at the VivaTech conference, which is described as Europe's biggest startup and tech event. Cook was interviewed by Guillaume Lacroix, CEO and founder of Brut, a media company that creates short-form video content. Much of the discussion centered on privacy, as it often does in interviews that Cook participates in. He...
Read Full Article • 275 comments