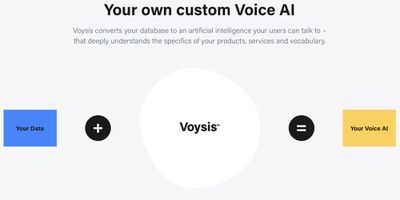 The company worked to improve voice assistants in online shopping apps, allowing software to better interpret requests from users. The website, which is now defunct, said that the technology used client databases with AI tools that deeply understand the specifics of products, services, and vocabulary to make the user experience "easier, faster and more intuitive."

The Voysis platform allowed customers to hone in on search requests with simple phrases like "I need a new LED TV" or "Just show me the 4K ones." Voysis said that shoppers could use voice to find what they're looking for 3x faster than typing using these kind of requests.

Bloomberg speculates that Apple could use Voysis' technology to improve ‌Siri‌'s understanding of natural language, or offer the Voysis platform to developers to improve how ‌Siri‌ works with apps.

Apple confirmed the acquisition to Bloomberg with its standard acquisition statement: "[Apple] buys smaller technology companies from time to time, and we generally do not discuss our purpose or plans."

Apple has acquired multiple AI startups over the course of the last five years, such as Xnor.ai, Turi, VocalIQ, Perceptio, Emotient, and more, to improve ‌Siri‌ and other AI-based offerings.

mazz0
Understanding speech is not what’s wrong with Siri
Score: 25 Votes (Like | Disagree)

Madmic23
Clippy was better than Siri. :(

mistasopz
Siri is the dumbest of all the smart assistants.
Score: 10 Votes (Like | Disagree)

Understanding speech is not what’s wrong with Siri

yeah. It kind of sucks at that too. It’s like autocorrect, it defaults to more common words that fit common language structures. Unfortunately with music, names and numerous other things Siri still struggles to get it right.
Score: 8 Votes (Like | Disagree)

Understanding speech is not what’s wrong with Siri

But it actually is... easily the biggest problem.
Score: 7 Votes (Like | Disagree)

would be great if Siri would NOT call home on everything

THIS. I wish I could set an alarm or get a quick calculation without it saying “sorry, I’m having problems connecting. Please try again later.” Just have a cache of useful things that really don’t need the internet saved and it’s fixed!

Unless of course it still relies on an internet connection to even know what I’m saying which I don’t think it does.
Score: 7 Votes (Like | Disagree)
Read All Comments