'iPhone 9' Production Reportedly Scheduled for February, But Could Be Impacted By Coronavirus Outbreak

Apple's production plans for the so-called "iPhone SE 2" or "iPhone 9" next month could face disruption due to the coronavirus outbreak that has caused more than 100 deaths in China, reports Bloomberg's Mark Gurman. 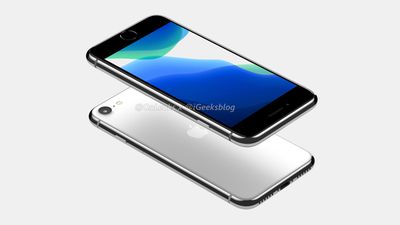 "‌iPhone‌ 9" concept render by @OnLeaks via iGeeksBlog
The vast majority of Apple's iPhones are made in China, by Foxconn in Zhengzhou and by Pegatron at an assembly plant near Shanghai. Both of the locations are more than 500 kilometers away from Wuhan, the epicenter of the virus outbreak, but Gurman suggests the distance "doesn't immunize them from its effects," and analysts he spoke to agreed.


"I can't imagine a scenario where the supply chain isn't disrupted," said veteran industry analyst Patrick Moorhead of Moor Insights & Strategy. "If there's one major hiccup in the raw materials, fabrication, assembly, test, and shipping, it will be a disruption."

Apple typically launches its flagship smartphones around September, so the coronavirus shouldn't affect those plans, but Apple is also reportedly prepping a new low-cost iPhone that's set to be released during the first half of 2020 – possibly as early as March – which puts those mass production plans "more at risk," says Gurman.

Apple has booked orders for up to 65 million of its older iPhones and up to 15 million units of the "‌iPhone‌ 9," according to the Nikkei Asian Review. Mass production of the new low-cost ‌iPhone‌ is reportedly due to start in the third week of February.

Confirmed cases of the coronavirus are rising in Henan province, where the Zhengzhou facility is located, and that could lead Foxconn or the government to close factories to prevent further contamination, according to Bloomberg's Matthew Kanterman.

Foxconn said it is monitoring the situation in China and following all recommended health practices. It declined to comment on production in specific locations but said, "We can confirm that we have measures in place to ensure that we can continue to meet all global manufacturing obligations."

Gurman notes that Apple dual-sources many of its components to mitigate the impact of extreme scenarios like the coronavirus. As such, a major immediate impact to its production plans is unlikely for now, according to a person familiar with its operations.

Over the weekend, Apple chief Tim Cook said in a tweet that the company intends to donate money in support of groups in China fighting the outbreak of the Coronavirus. A coronavirus is a family of viruses that include the common cold, but this particular virus causes severe acute respiratory infection and has never been detected before.

Bloomberg and Macrumours should be ashamed of themselves for publishing this article.Lives are more important than the production of a smartphone.Disgraceful !

They're not saying phones are more important than lives. They're saying the coronavirus could affect iPhone production. Hope your day hasn't been ruined.
Score: 22 Votes (Like | Disagree)

calstanford
Stupid. Who gives a **** if the iPhones lame update comes a months late. Lives are at stake!
Score: 15 Votes (Like | Disagree)

Bloomberg and Macrumours should be ashamed of themselves for publishing this article.Lives are more important than the production of a smartphone.Disgraceful !

Bloomberg is money/business focused, so why shouldn't they cover the impact the virus outbreak could have on business & revenue? Should they bury their heads in the sand so the professionally offended don't get offended?
Score: 12 Votes (Like | Disagree)

PickUrPoison
Gurman occasionally gets a decent Apple-related tip, but neither he nor Bloomberg are a credible source of information—let alone speculation—regarding a potential epidemic or the impacts thereof.

[AUT] Thomas
Of course that's the first thing that comes to my mind at a potential pandemic... the supply chain of a luxury product that's going to be released in 9 month.
Score: 8 Votes (Like | Disagree)

Gurman occasionally gets a decent Apple-related tip, but neither he nor Bloomberg are a credible source of information—let alone speculation—regarding a potential epidemic or the impacts thereof.

Boy, if I had a penny every time somebody advanced a conspiracy theory ...

Do you really think it is healthy to always blame a conspiratorial nefarious intent behind everything you don't like?
Score: 6 Votes (Like | Disagree)
Read All Comments