Apple CFO Luca Maestri is teaming up with auction site Charitybuzz to offer Apple fans the opportunity to bid on lunch with Maestri and a tour of the Apple headquarters in Cupertino, California.

Maestri will have lunch with two people at the Apple Park campus, with the proceeds from the auction benefitting the Andrea Bocelli Foundation. The lunch, which also comes with a tour with an Apple employee, will last for approximately one hour. 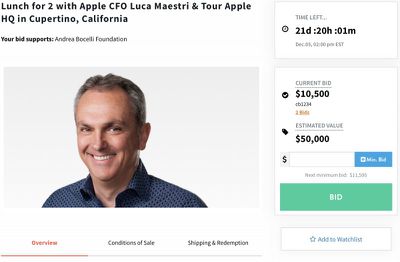 The Andrea Bocelli Foundation's goal is to empower people and communities in situations of poverty, illiteracy, distress due to illness, and social exclusion by promoting and supporting national and international projects that aim to overcome these barriers.

Apple CEO ‌Tim Cook‌ in past years has also done charity lunches facilitated by Charitybuzz to earn money for the Robert F. Kennedy Center for Justice and Human Rights, but the last one was held in 2017. That auction earned $680,000.

itsmilo
$12k an hour. I could stop working for the year after 4 hours.

SDJim
I wonder how long of an NDA the winner has to sign before the tour...
Score: 8 Votes (Like | Disagree)

aksala
Honestly I think this Celebrification (yeah I made that word up) of certain upper tier Apple employees has gotten out of hand. I honestly wish these folks would just stick to making great products instead of hamming it up for the cameras and crowds. I couldn't care less who is responsible for making my Apple products, as long as they continue to meet the standards that Apple has set. I'm not even necessarily talking about the dude featured in the lunch contest (never heard of him before this), but certain others who have used their Apple association as a springboard to Celebrity status.

One has to wonder what the rank-and-file Apple employee thinks of their overlords who get all the fame and glory while they toil in their labs and cubicles.
Score: 6 Votes (Like | Disagree)

Solomani
I'm a better deal. You can have a Taco Bell lunch with me for only $22.
Score: 5 Votes (Like | Disagree)

and 1989 others
How much? I get can a meal deal with Karen from Accounts for £3 each, and we even have the luxury of eating it in my 5 year old car, together.
Score: 5 Votes (Like | Disagree)
Read All Comments