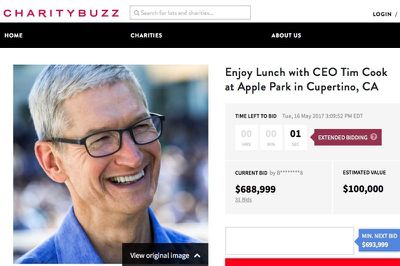 Image via setteB.IT
Today's auction winner will be able to eat lunch with Tim Cook at Apple Park, Apple's brand new campus that is still in the final stages of construction. The winner is able to bring one additional person to have a ~one-hour lunch with Cook, and while the cost of the lunch is included in the auction price, travel and accommodations are not.

Unlike past years, Cook's 2017 auction is limited to lunch alone and does not include tickets to an upcoming Apple keynote event.

All proceeds from today's auction will benefit the Robert F. Kennedy Center for Justice and Human Rights, a charity that Tim Cook has now supported for five years. The RFK Center aims to achieve "a just and peaceful world by partnering with human rights leaders, teaching social justice, and advancing corporate responsibility."

Some people have to much money to waste.

It's their money to waste. Earn yours and waste it however you please.
Score: 19 Votes (Like | Disagree)

ThomasJL
A transcript of the lunch conversation between the auction winner and Tim Cook:


Auction Winner: If I were CEO of a company, what should I focus on?

Tim Cook: Focus on pleasing the shareholders. Shareholders are more important than customers who want the best tools for creative endeavors. Making as much money as possible is more important than innovation. It's better to make as much money as possible while simultaneously not being innovative than it is to make slightly less money while simultaneously being highly innovative.

Auction Winner: What are your thoughts on hiring people?

Tim Cook: Fire people who have the most creative vision, like Scott Forstall. It's more important to have Kum Ba Ya collaboration instead of owning up to my responsibility of CEO by keeping Forstall's abrasive character in check like my predecessor successfully did. Hire people for politically correct reasons, such as gender-based affirmative action hires like Angela Ahrendts who was hired because she is a woman, not because she is the best-qualified person for the job. Take the best industrial designer in the world and put him in charge of UI design, even though it is a totally different skill set that is highly complex and that he has no experience with.

Auction Winner: Speaking of UI, what are your thoughts on UI?

Tim Cook: Ever since the introduction of the Macintosh in 1984, Apple has made the mistake of leading the industry in UI while other companies like Microsoft copied. I realized it's time for Apple to stop leading and start copying. Therefore, I agreed to get rid of the highly user-friendly skeuomorphic design that Apple pioneered and instead start copying Microsoft and Google by using flat design. I don't care if elderly people who have never used a computer in their life will be highly confused by flat design. I don't care that skeuomorphic design would help such elderly people and other first-time computer users by giving them visual clues. I care more about hipsters. Skeuomorphic design might have helped hipsters when they first started using computers, but now that hipsters are used to the interface, we don't need skeuomorphism anymore.

Auction Winner: Can you please give me a profound quote that you coined, that would sum up your mission here at Apple?

oftheheavens
Some people have to much money to waste.
Score: 8 Votes (Like | Disagree)

Some people have to much money to waste.

Donating money to charity is not a waste. And I don't think anyone would pay that much for a lunch no matter who it was with if it wasn't for charity.
Score: 7 Votes (Like | Disagree)

otternonsense
I would most likely donate to a "resurrect Steve Jobs" charity.
Score: 4 Votes (Like | Disagree)

DUIduckSAUCE
Having lunch with someone who's only there cuz u are paying them. Sounds like fun.
Score: 4 Votes (Like | Disagree)
Read All Comments