MacRumors has obtained never-before-seen screenshots of a new "Items" tab that Apple is developing for its Find My app in iOS 13. This tab is not available in the public version of the software update released today. 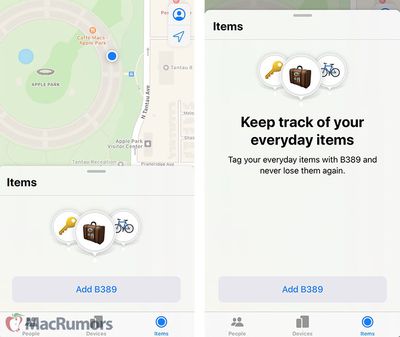 The new "Items" tab will be closely integrated with Apple's rumored Tile-like item tracking tags, codenamed "B389" internally. By tapping the "Add" button in the tab, users will be able to track the location of items affixed with so-called Apple Tags directly within the ‌Find My‌ app.

The tab informs users to "tag your everyday items with B389 and never lose them again," making it clear that Apple is working on a Tile competitor. MacRumors shared an image of Apple's tag from an internal build of iOS 13 last month, although it may not reflect the final design of the product.

MacRumors also shared a similar screenshot of the "Items" tab last month, but these screenshots provide a more detailed view.

iPhone users will receive a notification when they are separated from a tagged item, according to strings in the internal build of iOS 13. If necessary, users can then tap a button in the ‌Find My‌ app that will cause Apple's tag to start chiming loudly to help them locate the lost item.

If users are unable to find an item, they can place the attached tag into a "Lost Mode." Then, if another ‌iPhone‌ user comes across the lost item, they will be able to view contact info for the item's owner and contact them by phone or text message. The item's owner will be immediately notified.

"Safe Locations" can be set where a user will not be notified if an item is left in certain locations, and users will also be able to share the location of items with friends and family members, per the internal build of iOS 13.

Like the Pixie Tracker, the ‌Find My‌ app will likely incorporate features from Apple's ARKit framework. The internal build of iOS 13 includes an asset for a 3D red balloon that could help a user pinpoint a lost item after scanning a room with their ‌iPhone‌. There's also an image of a 2D orange balloon.

"Walk around several feet and move your ‌iPhone‌ up and down until a balloon comes into view," reads a string in internal iOS 13 code.

The internal build of iOS 13 containing these leaked images and screenshots is from early June, so we cannot guarantee that the "Items" tab or all of the details presented above will be exactly as described. We also cannot guarantee that Apple will ever release the tags, but it has certainly been working on them.

There's a better chance than not that the Apple Tags will eventually be released, as reputable analyst Ming-Chi Kuo has claimed the tags will support ultra-wideband technology, allowing the new iPhone 11 models equipped with U1 ultra-wideband chips to accurately pinpoint the position of the tags.

Apple did not announce its Tile competitor at its September event earlier this month, but it could unveil the tags at a potential October event or beyond.

Okay but why the heck does my watch not notify me when I leave my phone behind? This is the one feature I can’t believe is still missing after all these years.
Score: 45 Votes (Like | Disagree)

Internet Enzyme
I really wonder why they seem to cut the Tags so last minute. The keynote ended 20 minutes early and on a kinda awkward note. I think it has something to do with iOS 13 being on fire internally and the tag getting demoted in development time since they needed all hands on deck to get a semi stable build out for the iPhones. Delaying the tags is pretty unfortunate because the U1 chip, an awesome innovation, didn’t even get stage time and the one feature they are talking about when it comes to uwb tech is a pretty uneventful enhancement to the airdrop interface. would be interesting to know what all happened behind the scenes.
Score: 15 Votes (Like | Disagree)

Okay but why the heck does my watch not notify me when I leave my phone behind? This is the one feature I can’t believe is still missing after all these years.

Finding my iPhone in my house by pinging it is the most used feature of my Apple Watch by a large margin.
Score: 9 Votes (Like | Disagree)

I really wonder why they seem to cut the Tags so last minute. The keynote ended 20 minutes early and on a kinda awkward note. I think it has something to do with iOS 13 being on fire internally and the tag getting demoted in development time since they needed all hands on deck to get a semi stable build out for the iPhones. Delaying the tags is pretty unfortunate because the U1 chip, an awesome innovation, didn’t even get stage time and the one feature they are talking about when it comes to uwb tech is a pretty uneventful enhancement to the airdrop interface. would be interesting to know what all happened behind the scenes.

probably not to repeat the AirPower situation a couple years back.
Score: 7 Votes (Like | Disagree)

Gasu E.
This may become an iconic example of augmented reality tech. Awesome to scan your room and see a virtual ballon with a virtual string attached to your car keys.
Score: 6 Votes (Like | Disagree)
Read All Comments