Apple Arcade, Apple's new subscription gaming service, is now available for everyone following the launch of the iOS 13 update for the iPhone.

‌Apple Arcade‌ offers up dozens of games for one monthly $4.99 price, and reviews of the service have been positive, praising the wide selection of available titles. 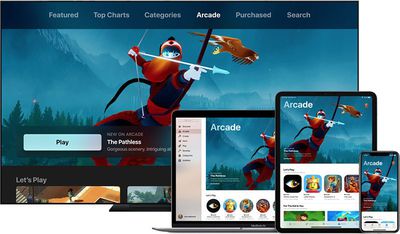 Apple actually began rolling out ‌Apple Arcade‌ to iOS 13 and iOS 13.1 beta testers earlier this week, but now it is available to everyone who has installed the release version of iOS 13.

When ‌Apple Arcade‌ first became available, there were just over 50 games available, but more titles have already been rolling out. Apple says that new ‌Apple Arcade‌ titles will be coming out on a weekly basis, with at least 100 games in the works.

While ‌Apple Arcade‌ is priced at $4.99 per month, that price allows up to six family members to access games through Apple's Family Sharing feature. There's also a one-month free trial available, so everyone can give it a try before paying.

You can access ‌Apple Arcade‌ through the App Store using the new ‌Apple Arcade‌ tab in the navigation bar. ‌Apple Arcade‌ looks similar to the standard ‌App Store‌ with apps arranged into different categories like "Start Your Adventure," "New Arrivals," "You Have to Hear This," "No Time to Blink," and more.

Apple's editorial team will highlight standout ‌Apple Arcade‌ titles, but there's also an option to access all available games, and you can search for titles as well.

Right now, ‌Apple Arcade‌ is available only on the ‌iPhone‌, though iOS 13 and 13.1 beta testers on iPad can install the update. Apple isn't releasing iPadOS until September 30, and tvOS 13 and macOS Catalina also aren't coming out until a future date. For more details on ‌Apple Arcade‌, make sure to check out our Apple Arcade guide.

If you have a favorite ‌Apple Arcade‌ title, make sure to share it in the comments down below, because there's a lot of available content to go through. Our sister site TouchArcade also has a dedicated Apple Arcade forum for discussing games, which is well worth checking out.

Unity451
Can't wait to delete all the freemium garbage games on my phone!
Score: 5 Votes (Like | Disagree)

blasto2236
It’s a real bummer that this isn’t available for tvOS at launch. For me, that’s a huge part of the appeal of the service, and having tested a lot of these games on the iPadOS beta, I’m eager to try them on a larger screen with a controller.

Sadly, it looks like this won’t be possible until my free trial is mostly up. Don’t have any interest in playing these games on a tiny iPhone screen, where I have the least amount of storage space. Kinda lame that’s the only officially available platform at launch.
Score: 3 Votes (Like | Disagree)

No true gamer will ever take this seriously. Glorified iOS titles & company that has never gotten gaming. Fail

A game on an iOS device doesn't mean that it's a bad or a sub-par experience anymore - it's time to end that thinking. The Apple TV, and the iPad Pro specifically (remember the keynote benchmarking it equal to an Xbox One S?), are capable of running some really good games, without any sacrifice of making it a 'light' version. And for whatever market reason, many games are priced even more affordable than their counterpart on a PS4, Nintendo Switch, or Steam.

Take for example games such as Dead Cells, Oxenfree, and Hyper Light Drifter. These are examples of games that are well reviewed by 'true gamers' on PC or traditional console, but now also available on Apple devices as a complete port including proper (thank goodness) controller support in iOS 13. Hyper Light Drifter even runs natively at 120hz on an iPad Pro, arguably making it the better version vs the Nintendo Switch (60hz) if you're using a controller. So we are far from the days of glorified iOS titles.

Sure, you won't be playing Call of Duty or Borderlands 3 on an Apple TV. At least not yet. But Apple Arcade are getting good indie developers to make games, with many expressing their excitement at this. Mini Metro is very much an indie but a beloved game, so it's nice to see that the developer put out Mini Motorways on Arcade. Exit the Gungeon is another one to check out since Enter the Gungeon was such a popular and well reviewed game. So long as they continue to be enticing and bring in well established developers, it will go well. Apple aren't even requiring games to be an absolute Arcade exclusive, as some of these games will be on PC. They just aren't going to be on other mobile platforms is all. This isn't the $15/mo Ultimate Game Pass that Xbox offers for AAA games today, but at just $5, I think we can already be optimistic for this starting point and where it can grow from here.
Score: 3 Votes (Like | Disagree)

Kabeyun
This is what a subscription feels like it should be for: pay a monthly fee, have access to a bunch of stuff. I know I’m picking an old scab, but the current money-grabbing trend of subscriptions for a single app, even one with no services, is a bunch of malarkey. Otoh, $5/month for a gaming catalog seems reasonable.
Score: 2 Votes (Like | Disagree)

No true gamer will ever take this seriously. Glorified iOS titles & company that has never gotten gaming. Fail

Don't you mean "no true scotsman"?
Score: 2 Votes (Like | Disagree)

Apple should give Mac, iPhone, iPad, and Apple TV buyers one free year of the Arcade service. Like the TV service, I'm not excited enough by this offering of what has so far looked like basic mobile games to start paying a separate monthly fee for it. Especially if these are the same games the Mac will be receiving.

Games offer much more value than a couple of TV shows. It’s a great service. The games are not exactly console level in terms of scope, true, but it’s a start.
Score: 1 Votes (Like | Disagree)
Read All Comments