Ahead of the launch of Apple Arcade this Thursday, Apple has allowed YouTubers and media sites to go hands-on with the service, and reviews are now available letting us know what we can expect.

Below, we've rounded up some highlights from the reviews, which will be of interest to anyone thinking of subscribing to ‌Apple Arcade‌. 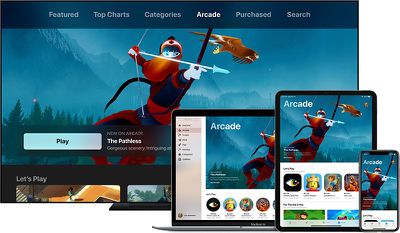 According to Engadget's Devindra Hardawar, the demo games that Apple allowed testers to play each had unique gaming elements. "It's clear that Apple is trying to build a service that shows off what its devices can do with truly innovative games," writes Hardawar.

He went on to call the service a "no brainer subscription" for anyone who owns an Apple device, and called ‌Apple Arcade‌ "one of the best deals in gaming."

Sneaky Sasquatch, image via Engadget
iMore's Rene Ritchie said that it felt like Apple spent "a lot of time" making sure there was a wide range of diversity in its launch catalogs and shared his thoughts in a hands-on video.

There's Frogger and Chu Chu Rocket and Lego Brawls, but there's also Skate City, Projection: First Light, and Way of the Turtle. One of the biggest, oldest knocks against Apple has been that they don't get gaming.

It's usually made by studios and players who want a hardcore, PC-like, even console-like experience on the Mac or iOS.

Where Cards Fall, a puzzle game from Snowman (via The Verge)

My colleague Dieter Bohn got to try out a few of the upcoming games, and his take is: "All the games are good." Even that Frogger game has more to it than first thought. It's made by Q-Games, which previously made PixelJunk Monsters, and it's almost indicative of the entire Arcade reveal: lackluster at first, until you look closer and see that there's actually a lot happening.

Gizmodo's Alex Cranz said that ‌Apple Arcade‌ "probably isn't going to suck," and that after sampling some of the games, he's "tentatively excited." He wasn't a fan of some of the gameplay on the iPad, though, and he thought that several of the games "looked really similar."

An ‌Apple Arcade‌ game on an ‌iPad‌, image via Gizmodo

Across the board, most of the games were a drag on the iPad. Quite a few of the games like to use the device itself to mimic a controller when played on touch devices. That works with a phone, which is roughly the same size as a controller from Sony or Microsoft. But using the iPad as a giant controller was really uncomfortable. My hands were too damn small to pretend a 10.2-inch iPad had joysticks on either side of the display.

Lifewire's Lance Ulanoff said that ‌Apple Arcade‌ games don't "break any new ground" beyond what's already in the App Store, but the promise of "all you can eat games" across Apple devices without in-app purchases for just $4.99 per month is "compelling."

At launch, ‌Apple Arcade‌ will be priced at $4.99 per month. That $4.99 fee will allow an entire family of up to 6 people (that uses Family Sharing) to access games.

Apple is planning to offer a free one month trial of ‌Apple Arcade‌, which is launching in more than 150 countries and regions. There will be dozens of new and exclusive games available, with additional games coming in the future.

yossi
As a parent of three young kids, if they have enough games to keep 2-9 year olds happy, this will be a massive slam dunk. I am so sick of the "free" games that have intrusive, inappropriate ads and constantly crash the ipad.
Score: 26 Votes (Like | Disagree)

realtuner
So, it doesn't suck like everyone predicted before even trying the games?
Score: 22 Votes (Like | Disagree)

TacoChowder
I'm excited for this. A bunch of indie creators I'm into are dropping games.

I'm also excited to see how the 'real gamers' on here complain that these are all bad games.
Score: 10 Votes (Like | Disagree)

Nunyabinez
I do consider myself a hard-core gamer and expect that the games I play on my PC will be beautiful, smooth and sophisticated.

But, when my adult kids come over, we play JackBox Games or LEGO titles on the TV with SteamLink.

I anticipate playing some of these instead on my AppleTV with controllers. And when I'm waiting for my oil change, it will be nice to have something decent to play on my phone and maybe even pickup where I left off on my AppleTV.

So, while some hard-core gamers can be snobs, some of us are happy to be casual sometimes serious at other times.

I will be signing up on day one.
Score: 8 Votes (Like | Disagree)

Look at Microsoft’s game pass. Great games great price and still not successful. Game subscriptions are kind of stupid if you ask me.

Microsoft has something like 10 million active phones in the wild. Apple has a billion.

Microsoft's service is $15/month for xbox and pc. Apple's is $5 for Mac, iPad and iPhone.

Remember, Apple device users in general aren't hardcore gamers. Arcade isn't for people looking for huge, complex, GPU-intensive first person shooters running on liquid-cooled graphics cards that cost $500. And most of those games aren't available for Mac anyway (although I use Boot Camp for those games.)

Apple is going to make a KILLING with this. Mark my words.
Score: 6 Votes (Like | Disagree)

Baymowe335
I thought Macrumors members already said the games sucked and this is a flop on arrival?
Score: 5 Votes (Like | Disagree)
Read All Comments