As part of a bipartisan investigation of competition in digital markets, the U.S. House Judiciary Committee today sent a letter to Apple CEO Tim Cook requesting that the company provide any documents and executive communications related to its various policies for the App Store, product repairs, and more. 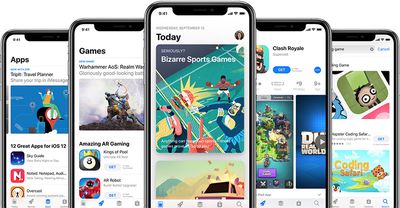 The investigation seeks any internal documents or communication involving Apple executives, such as emails, for the following topics:

The Committee has requested that Apple respond no later than October 14, 2019 and also sent similar letters to Facebook, Amazon, and Google.

heov
Incoming "it's Apple's store they can do what they want" comments from uneducated people.

These probes are warranted. Whether Apple is violating antitrust laws or not is up to the regulators.
Score: 23 Votes (Like | Disagree)

az431
Too bad they mailed it to the wrong address.

Incoming "it's Apple's store they can do what they want" comments from uneducated people.

These probes are warranted. Whether Apple is violating antitrust laws or not is up to the regulators.

Your definition of marketplace ("On iPhones, the App Store is the ONLY store") is contrary to antitrust law.

Incoming "it's Apple's store they can do what they want" comments from uneducated people.

These probes are warranted. Whether Apple is violating antitrust laws or not is up to the regulators.

Apple store is the only store because it gives me as a consumer, the confidence than more often than not, Apple will protect my data from apps whose intention is to gather data and share it with outside. I have the confidence that more often than not Apple will block any apps which has potential malicious intent and unsuspecting consumers might install that app if not for the app store and wind up in a situation similar to the one google had last week where 30 million android devices had malware infused app

The walled garden approach has been in play since 2007+. its been over 12 years now. every iPhone owner today is aware of its existence. Every ipHone owner has purchased the iPhone despite knowing it because they have accepted that this is the approach they feel will make their phone more often than not more secure than other vendors .
Score: 7 Votes (Like | Disagree)

jonnysods
Man, can we file anti trust requests to our governments?
Score: 7 Votes (Like | Disagree)

simonmet
The games Apple promotes in the Today and Games views are nearly always freemium games with consumable IAPs. Funny that, hey!

Apple isn’t this bastion of the moral high ground.
Score: 4 Votes (Like | Disagree)

These are not "regulators" looking into Apple, it is Congressman Jerry Nadler, Congresswoman Shelia Jackson Lee and the rest of the House Judiciary Committee. I don't know the backgrounds of all the members of the committee but I have my doubts about whether the committee leadership can even spell "Apple" let alone impartially evaluate their business model and the numerous trade offs between "walled gardens", app reviews, EULAs, etc. I would feel a little better if it really were "regulators" looking into this as they would be more likely to be knowledgeable about the technology and the market and they would likely be less partisan. Anyone who thinks the House Judiciary Committee is "bipartisan" hasn't been paying attention, it is probably the most partisan committee in the House.

Yes, that’s a big problem. These politicians really show their ignorance when you watch any coverage of them on TV. It’s very close to being silly sometimes.

If there are any good intentions in these probes, it is usually lost due to the ignorance of the politicians involved - I don’t care if they are Republican or Democrat.
Score: 3 Votes (Like | Disagree)
Read All Comments