Following the Apple Card's rollout to a limited number of customers in the Wallet app earlier this week, some are beginning to receive their physical, titanium Apple Card in the mail for use at stores that do not accept contactless payments.

The Verge's Nilay Patel has shared photos of his ‌Apple Card‌, revealing that it is thicker than his other metal and plastic credit cards. It was earlier reported that the Apple Card weighs around 14.75 grams, making it slightly heavier than the Chase Sapphire Reserve credit card but lighter than an American Express Platinum.

Physical Apple Card has arrived. I have surprisingly strong feelings about having a Goldman Sachs logo in my life? Anyway, you can see how much thicker it is than my plastic or metal cards. pic.twitter.com/hXi3q4ijoJ — nilay patel (@reckless) August 9, 2019

Another early adopter, Aaron Andino, has shared an Apple Card unboxing video on YouTube that provides a closer look at its packaging. The card and packaging look consistent with pre-launch photos that leaked.
The physical ‌Apple Card‌, made out of titanium, features a clean design with an Apple logo, a chip, and a name. There's no card number or expiration date on the card, nor is there a CVV on the back. Instead, these details are stored in the Wallet app for added security in the event the card is lost or stolen.

Read our step-by-step instructions on how to order a physical Apple Card by mail. The card ships free of charge and a notification is sent to your iPhone when it ships. The turnaround time appears to be a few days right now. 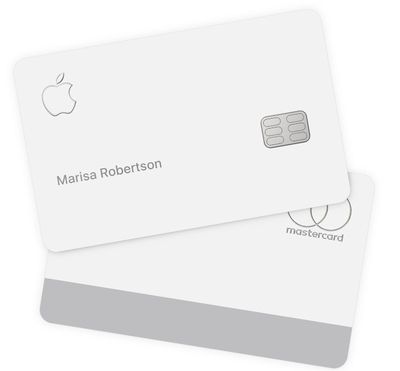 Later this month, Apple will allow all U.S. residents age 18 or older to apply for the card. So far, it appears that Goldman Sachs is being quite lenient with approvals, as CNBC and iMore have reported that some customers with credit scores in the 600s have been approved, albeit with lower credit limits and higher APRs.

When fully available, ‌iPhone‌ users can apply for the ‌Apple Card‌ in the Wallet app within minutes and take advantage of features such as 1-3 percent in daily cash back, color-coded spending summaries, and no fees. Just ahead of launching, the card's APR range was lowered to 12.99-23.99 percent.

Meh, the interest rate on my credit union card is 9.9%. I think I'll stick with that.

If you’re using credit cards properly, the interest should be of zero concern.
Score: 35 Votes (Like | Disagree)

richxps
What case are you getting for your card ?
Score: 34 Votes (Like | Disagree)

This is my first card that gives me no international fees. Super excited!
Score: 21 Votes (Like | Disagree)

BootsWalking
This is odd - I just opened my Apple Card box and instead of a credit card there was a Vampire Squid inside.
Score: 21 Votes (Like | Disagree)

I'd like to thank all those people on Twitter that are posting pictures of their new CC with their actual names. While it doesn't show the CC number, it does show that it is a mastercard and their name. It's just asking for fraud and identity theft. What idiots.

That's a pretty big stretch. You're not getting anywhere in defrauding someone with only their name.
Score: 21 Votes (Like | Disagree)
Read All Comments