Apple's upcoming Apple Card credit card is now being tested by both its corporate and retail employees ahead of a planned summer launch, and unsurprisingly, some images of the card have leaked out.

We already know what the ‌Apple Card‌ looks like thanks to Apple's promotional materials, but it's still interesting to see the design in person, with iMore sharing some photos provided by an Apple employee. 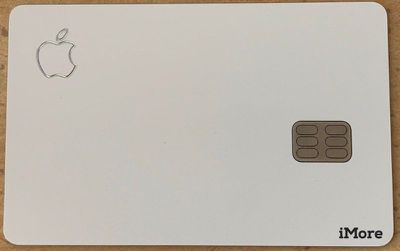 In person, the titanium card is as minimalist as it looks online, with the front featuring a simple embossed Apple logo, a chip, and a name, which in iMore's image, has been removed for privacy. There's no card number or expiration date included, nor is there a CVV on the back.

The ‌Apple Card‌ won't use a traditional card number, instead generating virtual card numbers and confirmation codes for purchases, which can be obtained from the Wallet app on the iPhone.

Apple delivers the ‌Apple Card‌ in a plain white sleeve with an Apple logo on the front. The inside is multicolored, representing the different purchase categories that will be listed and colorized inside the Apple Wallet app when you make an ‌Apple Card‌ purchase.

According to iMore, Apple is approving people with a range of credit scores. A person with a credit rating between 600 and 700 was approved, though with a $1,000 credit limit. APRs range from 13.24 percent to 24.24 percent.

After applying for the card, it took the Apple employee iMore spoke to approximately one week to receive their ‌Apple Card‌.

Apple is planning to launch the ‌Apple Card‌ in the summer, and employees testing the card are running the iOS 12.4 update, which is currently in beta. Apple has seeded four betas of iOS 12.4 so far, and it's probably not too far off from release.

For more information on the upcoming ‌Apple Card‌, make sure to check out our full Apple Card guide.

thadoggfather
Fetishing over credit card designs now... this is of course all just my personal opinion, but it seems like we've 'lost the plot'
Score: 107 Votes (Like | Disagree)

Stars&Stripes
Was the weighing necessary? o_O
Score: 53 Votes (Like | Disagree)

cmaier
“it is still interesting...”

NightFox
Needs to be thinner.

smaffei
Here's hoping that the $1,000 limit is just for the test period. Because, Apple barely makes anything under a $1,000 these days.
Score: 42 Votes (Like | Disagree)

1bcoolrob
Will they make a tear down video soon?
Score: 42 Votes (Like | Disagree)
Read All Comments

Sunday January 16, 2022 3:37 pm PST by Joe Rossignol
A bug in WebKit's implementation of a JavaScript API called IndexedDB can reveal your recent browsing history and even your identity, according to a blog post shared on Friday by browser fingerprinting service FingerprintJS. In a nutshell, the bug allows any website that uses IndexedDB to access the names of IndexedDB databases generated by other websites during a user's browsing session....
Read Full Article • 234 comments