The 2019 iPhones could introduce support for the Apple Pencil, according to a list of feature predictions shared today by Citi Research (via Business Insider).

"Support for iPhone pencil/stylus" was on Citi Research's list of upcoming features it expects to see in the 2019 iPhones, but we've heard extensive rumors about the upcoming devices and ‌Apple Pencil‌ support has seldom been mentioned. 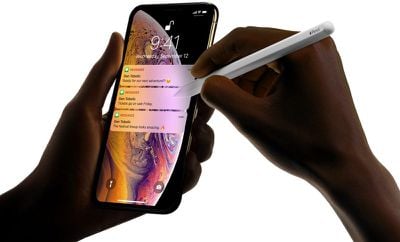 At one point in 2018, Apple analyst Ming-Chi Kuo said that ‌Apple Pencil‌ support is a possibility for a future iPhone, but he did not specify when and has made no mention of the feature in his myriad reports on what's coming to the 2019 iPhones. Kuo at the time said that ‌Apple Pencil‌ support would hinge on Apple releasing a larger ‌iPhone‌, but it's not clear if that meant larger than the 6.5-inch ‌iPhone‌ XS Max.

Korean site The Investor, which does not have an established track record for accuracy, also suggested Apple is considering offering an Apple Pencil-like stylus that could launch as early as 2019, but no reliable source has indicated ‌Apple Pencil‌ support is in the works for the 2019 ‌iPhone‌ lineup.

Ahead of the launch of the 2018 iPhones, there were multiple reports from Asian supply chain sources indicating the new devices would work with the ‌Apple Pencil‌, which did not happen.

Apple has, however, expanded ‌Apple Pencil‌ compatibility to its entire iPad lineup, from the 12.9-inch iPad Pro to the 7.9-inch iPad mini, so future ‌Apple Pencil‌ support for ‌iPhone‌ is not out of the question, but seems unlikely for 2019 given the lack of rumors.

Apple's 2019 ‌iPhone‌ lineup is expected to be similar to the 2018 lineup, with 5.8 and 6.5-inch OLED devices planned alongside a 6.1-inch LCD ‌iPhone‌ that's more affordable. The new iPhones will look largely similar to the 2018 iPhones, with the exception of new rear camera setups. For more on what's expected in 2019, make sure to check out our 2019 iPhone roundup.

borntrouble
"Let's use a stylus!"
Score: 30 Votes (Like | Disagree)

I though Jobs hated styli of any kind. This goes against Apples core principles.

The creative possibilities that the Apple Pencil provides for artists and the type of stylus that Steve Jobs talked about are two very different things.
Score: 20 Votes (Like | Disagree)

Darth Tulhu
I will never understand people that object to something that they DON'T HAVE TO USE.

Steve Jobs' quote was related to the NECESSITY of a stylus and an interface designed around that necessity.

As a current Galaxy Note8 user, I can appreciate the precision a stylus offers in certain scenarios.

In my mind, this is long overdue, especially for the Plus/Max models.
Score: 19 Votes (Like | Disagree)

mattopotamus
Do you hear that?! That is Steve rolling in his grave.
Score: 19 Votes (Like | Disagree)
Read All Comments