What to Expect From the 2019 iPhones: Hands-On With Dummy Models

Ahead of every new iPhone release, we're inundated with rumors, part leaks, mockups, and dummy models, all of which give us a good idea of what to expect when new devices launch.

2019 is no exception. We've seen all of the above, and now, we've managed to get our hands on three dummy models of the upcoming iPhones, which offer up a look at the designs and feature changes we're likely to see later this year. 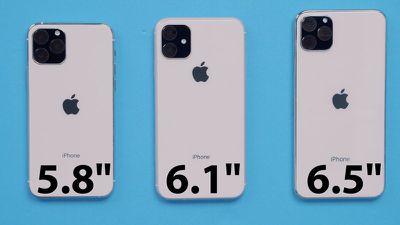 The sole major physical change to the new iPhones is a redesigned camera bump that's larger and square-shaped, as we've heard in multiple rumors. Apple is expected to use a triple-lens camera setup for the 5.8 and 6.5-inch iPhones coming in 2019.

This triple-lens camera setup could allow for a larger field of view, a wider zoom range, better low light performance, and it will capture more pixels for sharper, clearer images even when lighting is not ideal. Note that the dummy models we have here feature lenses that protrude slightly -- in the finished versions of the 2019 ‌iPhone‌ models, the lenses are expected to be flush with the bump. These dummy models provide a solid look at what we're expecting, but the completed ‌iPhone‌ is going to look more elegant.

Google has received a lot of attention for its Night Sight mode that allows for bright shots even in the dark, and we wouldn't be surprised to see Apple offer a competing feature in 2019.

We've also heard from Bloomberg that Apple is working on a feature that would use some extra pixel data to do provide tools for automatically repairing a photo or video to fit in a subject that "may have accidentally been cut off from the initial shot." This sounds a little confusing, but it presumably takes advantage of that super-wide angle lens to let you edit the field of view of an image.

While the next-generation 5.8 and 6.5-inch iPhones will have the aforementioned triple-lens setup, rumors suggest the next ‌iPhone‌ XR will have just two lenses, which is still one more lens than the current model. Presumably this will include a standard wide-angle lens and a telephoto lens, allowing the ‌iPhone‌ XR to better mimic the capabilities of the current ‌iPhone‌ XS and XS Max.

2019 6.1-inch ‌iPhone‌ compared to ‌iPhone‌ XR
Though the next-generation ‌iPhone‌ XR has just two lenses, the dummy model features the same square-shaped camera bump that's on the more expensive models with triple-lens cameras, which Apple may have done for design parity across the 2019 ‌iPhone‌ lineup.

Aside from the rear camera bump changes, the three upcoming iPhones feature no other design changes, at least not in these dummy models. There were rumors that the volume button would be redesigned with a round-style switch that we've previously seen in iPads, but that's not depicted here.

‌iPhone‌ XS volume buttons compared to 5.8-inch 2019 ‌iPhone‌ dummy
These dummy models are based on schematics and leaks from Apple factories and are likely sourced from case makers eager to be the first to get cases for the new iPhones on the market. There's big money in getting an accurate look at upcoming iPhones to make early cases, and most years, dummy models like these are spot on.

For the most part, these dummy models also are in line with most of the rumors that we've heard, so they're likely an accurate representation of what we can expect. There are no changes to the notch expected this year, though rumors suggest we could see some tweaks in 2020.

Display of ‌iPhone‌ XS Max compared to display of 2019 6.5-inch ‌iPhone‌
Apple may, however, remove 3D Touch from the 2019 ‌iPhone‌ lineup. The 2018 ‌iPhone‌ XR did not have ‌3D Touch‌, and we've heard a few rumors suggesting ‌3D Touch‌ will be eliminated from all iPhones in 2019. It's not yet clear if this is accurate, but iOS 13 does hint at its removal by adding 3D Touch-style Context Menus that can be activated on devices like iPads with a long press.

There were rumors that the new iPhones would use a frosted glass, also not seen in the models we have here. It's possible that a new glass look is still a planned feature and just wasn't included because material wouldn't impact case fit, but there's also a chance that rumor wasn't accurate.

For the next-generation ‌iPhone‌ XR in particular, while not seen in the dummy model, there are rumors of new colors including a lavender shade and a green shade, which might replace the existing blue and coral colors.

A render of the colors we could see for the ‌iPhone‌ XR successor
We heard other early rumors about the 2019 iPhones that no longer seem to be accurate. There was talk that Apple's triple-lens camera would have some 3D sensing functionality that would be similar to the TrueDepth camera system, but that's been pushed to 2020 and will be a major feature of the 2020 iPhones.

There was also talk of Apple switching from Lightning to USB-C in the 2019 ‌iPhone‌ lineup because the company brought USB-C to the iPad lineup, but based on these dummy models and a multitude of rumors, Apple's sticking with Lightning.

As for internals, we can expect an upgraded, faster A13 chip, and larger batteries could potentially bring some battery life improvements. One neat internal tweak will let the 2019 iPhones serve as Qi-based chargers for other devices, so you may be able to charge one ‌iPhone‌ with another or charge up your AirPods using your ‌iPhone‌.

Faster Wi-Fi 6 support could be included in the 2019 iPhones, along with ultra wide-band support for improvements to indoor positioning and navigation. Apple may also include an 18W USB-C power adapter and a Lighting to USB-C cable with the new iPhones, allowing for fast charging out of the box.

There's no word on what the 2019 iPhones will be called, but many have taken to referring to them as the iPhone 11, ‌iPhone 11‌ Max, and ‌iPhone‌ 11R, which is a possibility, though not confirmed.

As for pricing, Apple may be planning to price the new iPhones similarly to the 2018 iPhones as we've heard no rumors about pricing updates. There's still a chance for some pricing tweaks, though, as Apple did see a dip in sales in countries like China that's partially attributable to high ‌iPhone‌ prices.

Apple is expected to unveil the new 2019 iPhones in September, and an event could potentially be held during the week of September 9. MacRumors has heard from a reliable source that Apple is planning to unveil the new iPhones on Tuesday, September 10, which is quite likely given past event dates.

For more on what to expect from the 2019 iPhones, make sure to check out our full 2019 iPhone roundup.

(Thanks to Sonny Dickson for helping us get our hands on these dummy models!)

555gallardo
Those cameras are unapologetically hideous
Score: 91 Votes (Like | Disagree)

Sedulous
Not too excited about that epic camera square. Wish Apple would eliminate the camera bump, thicken the phone a little and put in a larger battery. Oh and at these prices, use actual sapphire lens instead of the stuff that has a hardness closer to regular glass. Speaking of glass, dump the glass backing for ceramic. If Apple wants to charge a premium, the product needs to actually differentiate that premium from everyone else. Lastly, please Apple, get those storage prices back down to Earth.
Score: 62 Votes (Like | Disagree)

FightTheFuture
Unlike the notch - no-one will get passed that camera bump.
Score: 41 Votes (Like | Disagree)

What to Expect From the 2019 iPhones