As it has done in years past, Apple yesterday marched in the annual San Francisco Pride parade, which is one of the bigger Pride events in the country and sees nearly 100,000 spectators during the event. Apple employees appeared in the parade with a large sign that showcased a rainbow version of the Apple logo. 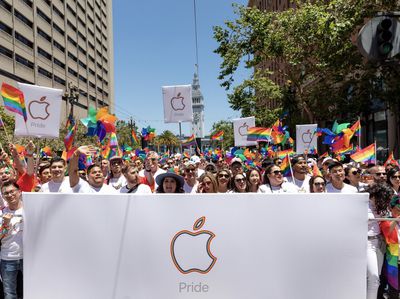 Happy Pride to everyone celebrating around the world! Great to see so many Apple employees marching today in San Francisco! 🌈 pic.twitter.com/lVKrF90HWa — Tim Cook (@tim_cook) June 30, 2019

Apple CEO Tim Cook was in attendance, as seen in a few selfies taken during the parade with fans and fellow Apple employees. A few other Apple executives marked the event as well, including Apple's new retail chief Deirdre O'Brien.

via @deirdre.at.apple on Instagram
Apple has celebrated Pride in multiple ways this year, including the launch of the new Apple Watch Pride Sport Loop earlier in June. The new watch band is the third iteration of the Pride design for the Apple Watch, following two rainbow-emblazoned Woven Nylon Pride bands that released in 2017 and 2018.

The company also routinely donates to charities that support LGBTQ individuals, and Cook himself is set to receive GLSEN's "Champion Award" for his ongoing commitment to fighting for LGBTQ rights. Cook recently stated, "I am grateful to GLSEN for this honor and for all their work to ensure the LGBTQ community is treated with dignity and respect."

Apple has long voiced support for LGBTQ causes like same sex marriage, as well as having spoken out against some controversial laws that predominantly risked negatively affecting the lives of gay, lesbian, and transgender individuals.

Before he publicly came out as gay in late 2014, Apple CEO ‌Tim Cook‌ fought for equality in speeches and op-eds. Under late CEO Steve Jobs, Apple also opposed many discriminatory laws, including 2008's Proposition 8 that sought to eliminate the right to same sex marriage in California.

Since when are Armed forces and emergency services a class of oppressed people who aren't afforded the same rights as the majority of Americans?
[doublepost=1561995133][/doublepost]

Never! We are nobody here. LGBRTSBLABLABLA (I always get so confused how to spell it) is an only one-way street man.

The acronym is quite long, but LGBTQ will suffice... I haven't met anyone int he BLA BLA BLA category though, is that where you fall?
Score: 75 Votes (Like | Disagree)

rpat701
It's amazing we have a month for this but only a day for vets. That's tell of who we are as a society right now. SMFH
Score: 73 Votes (Like | Disagree)

CooKieMoNs7eR
when is straight month? JK
Score: 56 Votes (Like | Disagree)

when is straight month? JK

Never! We are nobody here. LGBRTSBLABLABLA (I always get so confused how to spell it) is an only one-way street man.
Score: 38 Votes (Like | Disagree)

It's amazing we have a month for this but only a day for vets. That's tell of who we are as a society right now. SMFH

SYFH all you want. Military Appreciation Month is May and has been since 1999. It took Google all of 0.59 seconds to find that information.
Score: 37 Votes (Like | Disagree)
Read All Comments

Friday November 25, 2022 2:58 am PST by Sami Fathi
An Apple engineer has addressed the lack of lossless audio support in the second-generation AirPods Pro in a new interview. Current Bluetooth technology in the AirPods lineup means that Apple's audio products do not support Apple Music Lossless audio. Apple has previously hinted that it may develop its own codec and connectivity standard that builds on AirPlay and supports higher quality...
Read Full Article • 173 comments