At WWDC 2019 earlier this month, Apple announced Sign In with Apple, a new privacy-focused login feature that will allow macOS Catalina and iOS 13 users to sign into third-party apps and websites using their Apple ID. 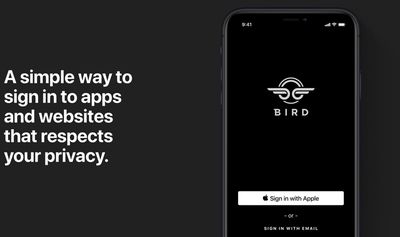 The feature has been largely welcomed as a more secure alternative to similar sign-in services offered by Facebook, Google, and Twitter, since it authenticates the user with Face ID or Touch ID, and doesn't send personal information to app and website developers.

However the implementation of Sign In with Apple has now been questioned by the OpenID Foundation (OIDF), a non-profit organization whose members include Google, Microsoft, PayPal, and others.

In an open letter to Apple software chief Craig Federighi, the foundation praised Apple's authentication feature for having "largely adopted" OpenID Connect, a standardized protocol used by many existing sign-in platforms that lets developers authenticate users across websites and apps without them having to use separate passwords.

Yet it cautioned that several differences remain between OpenID Connect and Sign In with Apple that could potentially put users' security and privacy in jeopardy.

To remedy the situation, the foundation asked Apple to address the differences between Sign In with Apple and OpenID Connect, which have been recorded in a document managed by the OIDF certification team.

It also invited the company to use OpenID's suite of certification tests to improve the interoperability of the two platforms, publicly state their compatibility, and join the OpenID Foundation.

Shortly after unveiling Sign In with Apple, the tech giant told developers that if an app lets users log in using their Facebook or Google logins, then it must also provide an alternative Sign In with Apple option.

The company then raised some eyebrows when it emerged that its updated Human Interface Guidelines asked app developers to place its authentication feature above other rival third-party sign-in options wherever they appeared.

Precursor
OpenID "a non-profit organization whose members include Google, Microsoft, PayPal, and others."

garylapointe
Am I missing something in that the headline doesn't seem to support this with more info in the MacRumors story?

"reduces the places where users can use Sign In with Apple and exposes them to greater security and privacy risks."

"reduces the places where users can use Sign In with Apple"

Or is it just more risk in that it's not implemented everywhere?

Stating risk without actually reporting anything about the risk isn't really news and is kind of clickbaity...
Score: 68 Votes (Like | Disagree)

raybob
They’re worries because their biggest source of income “selling customers’” info is in jeopardy.
Google, microsoft and PayPal?!!!

It’s like pharmaceutical companies becoming members of a non profit which is concerned about cheaper medicine.
Score: 34 Votes (Like | Disagree)

btrach144
I’m going to assume Apple knows what it’s doing here and purposefully chose to leave out parts of the OpenID standard that didn’t align with Apple’s security needs or vision.
Score: 26 Votes (Like | Disagree)

goobot
The title sounds like Apple sign in is flawed but the article says that it’s just not available everywhere which somehow makes it a sercurity risk?
Score: 25 Votes (Like | Disagree)

Not at all. I've already heard several Apple developers say they're concerned about the lack of interop with OpenID.

Not at all confirmed by your anecdotal story?
Score: 24 Votes (Like | Disagree)
Read All Comments

Thursday January 26, 2023 6:30 am PST by Tim Hardwick
The new Mac Pro coming later this year is expected to feature the same spacious modular design as the 2019 model, but with fresh concerns over its lack of upgradeability surfacing, some users are beginning to wonder what the transition away from Intel architecture actually means for Apple's most powerful Mac. The current Intel Mac Pro that Apple sells is popular with creative professionals...
Read Full Article • 517 comments