Jony Ive Once Insisted on Apple Car Without a Steering Wheel

Following the big news that Jony Ive will be resigning from Apple later this year after nearly 30 years at the company, new details continue to emerge about the iconic designer and his work over the years. 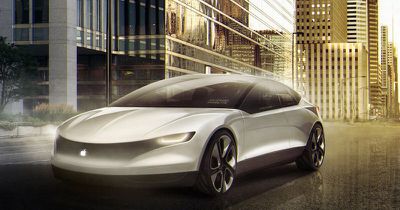 One of many secretive projects that Ive worked on was the so-called Apple Car, according to The Information. The report claims that Ive came up with multiple early prototypes of the autonomous vehicle, including one made out of wood and leather that lacked a steering wheel at Ive's insistence.

Ive instead wanted the vehicle to be controlled by Siri, and to demonstrate the concept to Apple CEO Tim Cook, the report claims a nearby actress pretended to be ‌Siri‌ by responding to voice commands from Apple's executives. It is unclear exactly how this would have worked or how serious Apple was about the idea.

The report adds that Ive also worked on a much-rumored but never-released Apple television set and early prototypes of the Apple Watch.

In an internal memo to Apple employees obtained by BuzzFeed News, Cook noted that Ive has collaborated closely with Apple's COO Jeff Williams for many years. Williams, who has led development of the Apple Watch since its inception, will spend more of his time working with Apple's design team in their studio.

I'm writing to let you know about some changes to the ET involving two people who embody Apple's values and whose work will help define Apple's future.

I'm happy to announce that Sabih Khan has been named to the executive team as senior vice president of Operations reporting to Jeff Williams. Sabih has worked on every Apple product since the late 90s, always committed to delighting our customers while advancing quality, sustainability and responsibility in manufacturing. His team makes possible some of the most beloved — and most complex — products in the world, and Sabih leads them with heart. I am thrilled to have him overseeing our supply chain.

Today, we also mark another important evolution for our company. After nearly 30 years at Apple, Jony Ive is starting an independent design firm which will count Apple among its primary clients and will depart the company as an employee later this year. Jony's contributions are legendary, from the central role he played in Apple's revival beginning in the late 90s, through the iPhone and perhaps his most ambitious project, Apple Park, where he has put so much of his energy and care in the past few years. I am proud to call Jony a friend, and those who know him know his ideas and curiosities are boundless. We will all benefit — as individuals who value great design, and as a company — as he pursues his passions and continues his dedicated work with Apple.

Of all his accomplishments, Jony cites the team he helped to build as one of his proudest. His longtime collaborators, Evans Hankey and Alan Dye, are strong stewards of Apple's design ethic and creative culture. Collaboration and teamwork are defining features of Apple's success across the company.

Evans and Alan will report to Jeff Williams. As many of you know, Jony and Jeff have been close collaborators and partners for many years. In particular, Jeff's leadership in developing Apple Watch brought together a cross-organizational team, unprecedented in scope, to produce Apple's most personal device ever. This is what Apple does at its best: elevating a category beyond its imagined limits, and revealing how a single device can be so much more than the sum of its parts. I'm incredibly excited about the design team's work, both underway and yet to come.

In line with a Bloomberg report, The Information claims that Ive's day-to-day involvement at Apple has already been declining since the Apple Watch launched in 2015. Ive's recent focus has been on the company's Apple Park headquarters, which had a formal grand opening in May.

Apple announced that Ive will be forming an independent design studio named LoveFrom that will count Apple among its "primary clients," suggesting that he will continue to have some influence on the company's products.

IAmGLaDOS
"Hey Siri, turn left"
"Here's what I found on the web for: turn left"
Score: 130 Votes (Like | Disagree)

Ive instead wanted the vehicle to be controlled by Siri ('https://www.macrumors.com/guide/siri/'), and to demonstrate the concept to Apple CEO Tim Cook ('https://www.macrumors.com/roundup/tim-cook/'), the report claims a nearby actress pretended to be Siri by responding to voice commands from Apple's executives. It is unclear exactly how this would have worked or how serious Apple was about the idea.

This sounds like something I would've come up with! :eek: In fact…

oldmacs
Jony had a lot of good ideas.. but having Siri control a car isn't one of them...
Score: 56 Votes (Like | Disagree)

DotCom2
I don't think Jony is going to have any involvement with Apple. That's just a Wall Street pacifier.
Score: 40 Votes (Like | Disagree)

Jsameds
I must admit, I had to stop myself from laughing out loud in the office when I read that headline :D
Score: 33 Votes (Like | Disagree)

cube
If it did not have a steering wheel you would probably be able to add one externally using a dongle.
Score: 28 Votes (Like | Disagree)
Read All Comments