Apple Park is decorated with the colors of Apple's classic rainbow logo today in celebration of the formal opening of Apple's new headquarters, and as a tribute to its late co-founder Steve Jobs, who helped conceptualize the spaceship-like design of the main building on the campus prior to his death.

First and foremost, Apple has set up a stage with a rainbow arch within the inner circle of the main building, as we shared last week. 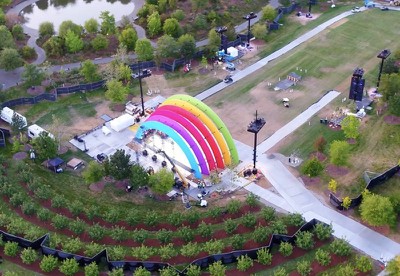 The rainbow colors can further be seen on some stairs and walkways at ‌Apple Park‌, on coffee cups at the Caffè Macs employee cafeteria, and on some of Apple's shuttle buses. Apple employees have also received classic Apple rainbow logo pins with the message "thank you for being part of what makes Apple, Apple."

Rumors suggest that Lady Gaga will be making a special performance at ‌Apple Park‌ later today. The pop star has visited Apple before, having previously dropped by its Infinite Loop campus to visit Steve Jobs. Apple executive Eddy Cue recounted that experience in an interview with Steven Levy last year:

Lady Gaga once came in to visit Steve. I don't know exactly what she was wearing, but it looked like it was made out of, like, a Glad trash bag, and she had these huge heels and these gigantic glasses. I'm thinking, "This is going to be a disaster." But she sat down and started talking with Steve and she had all these great ideas.

Lady Gaga also performed at the iTunes Festival at the Roundhouse in London in 2013.

Apple employees began moving into ‌Apple Park‌ as early as the spring of 2017, but the process took many months, and some construction and landscaping also continued for quite some time. A recent drone video showed that the campus now looks lush and green, with hundreds of trees and a large central pond.


Lady Gaga's performance would in all likelihood be a private event for Apple employees.
Tag: Apple Park
[ 119 comments ]

Why so much rainbow?

Because that was one of Apple's most famous logo styles.
Score: 41 Votes (Like | Disagree)

Baymowe335
Any way we can keep this clean? Or will everyone be a comedian/snark?
Score: 23 Votes (Like | Disagree)

I remember the days of the rainbow Apple logo.
Days on which Steve Jobs was in charge.

Steve Jobs actually retired the colorful logo in 1998, the year after he returned to Apple.
Score: 22 Votes (Like | Disagree)

NickName99
Love it! So fun to see the old rainbowish logo referenced in this way.

I like this old Jean-Louis Gassée quote:
“One of the deep mysteries to me is our logo, the symbol of lust and knowledge, bitten into, all crossed with the colors of the rainbow in the wrong order. You couldn’t dream a more appropriate logo: lust, knowledge, hope and anarchy.”

Spacetime Anomaly
The internet: Where grown men get upset about rainbows.
Score: 18 Votes (Like | Disagree)
Read All Comments

Friday July 10, 2020 11:12 am PDT by Juli Clover
Apple this month published a support document that warns customers against closing their Mac notebooks with a cover over the camera as it can lead to display damage. Image via Reddit Apple says that the clearance between the display and the keyboard is designed to very tight tolerances, which can be problematic. Covering the camera can also cause issues with automatic brightness and True Tone....
Read Full Article • 309 comments

Friday July 10, 2020 7:24 am PDT by Eric Slivka
Apple and Foxconn have reached a key milestone in the development of Apple's long-rumored augmented reality headset, with the semitransparent lenses for the device moving from prototype to trial production, reports The Information. Apple is developing the lenses on a single production line at a Foxconn factory in Chengdu in southwestern China, where most of Apple’s iPad production is...
Read Full Article • 78 comments

Friday July 10, 2020 2:58 am PDT by Tim Hardwick
At last month's WWDC, Apple officially announced that its Mac computers will be transitioned from Intel x86 to homegrown Apple Silicon chips. Apple said it plans to deliver the first Apple Silicon Mac by the end of the year and complete the transition in about two years. According to Apple analyst Ming-Chi Kuo, a 13.3-inch MacBook Pro with a form factor similar to the current 13.3-inch...
Read Full Article • 176 comments