Apple today released iOS 12.3, the third major update to the iOS 12 operating system that first launched in September 2018. iOS 12.3 comes over a month after the release of iOS 12.2, an update that introduced the Apple News+ service, brought new Animoji, and included dozens of other changes.

The iOS 12.3 update is available on all eligible devices over-the-air in the Settings app. To access the update, go to Settings > General > Software Update. As with all iOS updates, iOS 12.3 is free to download, but it may take some time for iOS 12.3 to propagate to all iOS users. 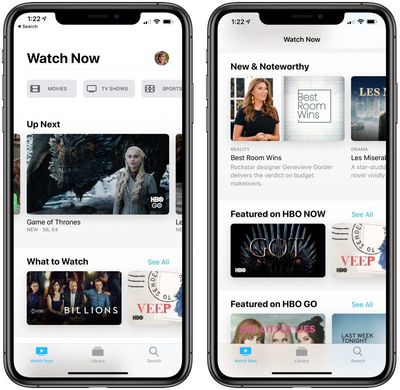 Much of the iOS 12.3 update focuses on the TV app, which has been overhauled and enhanced with a new look and fresh functionality. Apple first introduced the updated TV app at its March 25 event, and after several weeks of beta testing, the new app is ready for its launch.

In the overhauled TV app, "Watch Now" and "Up Next" are still front and center for keeping track of the TV shows and movies that you're watching, but there's a new machine learning-based recommendation engine that offers up customized content suggestions based on your viewing preferences and history.

The TV app's interface has been streamlined with sections for movies, TV shows, sports, and children's content, and on iOS devices, there's a bottom navigation bar for accessing the library, search, and Watch Now options.

Apple added a new "Channels" feature in the TV app, which is a major component of the company's new services push. Channels are subscription services that you can sign up for and watch within the TV app without having to open up another app, and when you use them, Apple gets a cut of the subscription revenue.

As an example, if you come across a show you want to watch on iPhone or Apple TV that's on HBO, Showtime, or Starz and you don't already have a subscription, you can tap to subscribe right in the TV app and then watch the show right away without having to open a third-party app.

Some of the new Channels that will be supported include Acorn TV, CBS All Access, Starz, Showtime, HBO, Nickelodeon, Mubi, Tastemade, Cinemax, Sundance, EPIX, Smithsonian, The History Channel Vault, and Comedy Central Now.

You're still going to get recommendations for content from services that aren't part of the Channels feature, but non-channel content will still need to be watched in a third-party app. You'll also find all of your iTunes TV shows and movies available in the TV app, and you can purchase new content too.

The new ‌Apple TV‌ app is available in more than 100 countries starting today, and with Family Sharing, up to six family members are able to share subscriptions to ‌Apple TV‌ channels. Channels content can be watched both online or offline.

AirPlay 2
- AirPlay 2 now supports sharing videos, photos, music and more from your iPhone and iPad directly to your AirPlay 2-enabled smart TV
- One tap playback automatically plays your chosen TV show or movie on the last screen you used based on time and location
- Siri Suggestions to watch movies and TV shows now include an option to AirPlay
- Intelligent suggestions are all done on-device so your personal information stays private

Apple TV app
- The Apple TV app features an all new design that highlights expertly curated collections and personalized recommendations
- Apple TV channels offer subscriptions to HBO, Showtime, Starz, and more, available to watch directly in the Apple TV app, online or off
- Subscriptions to Apple TV channels can be shared with up to six family members, with no new apps, accounts, or passwords needed
- New release movies are available to buy or rent in the Apple TV app, including the full catalog of 100,000+ movies and the largest selection of 4K HDR titles
- A new dedicated kids section helps you discover editorially-handpicked shows and movies safe for kids of all ages
- The Apple TV app can now intelligently suggest playing to the most likely Apple TVs or AirPlay 2-enabled TVs nearby

This update also includes bug fixes and improvements. This update:
- Adds the ability to follow a magazine from the Apple News+ catalog browsing view
- Apple Music’s For You tab now updates multiple times a day suggesting music based on themes like genres, artists, and moods you love
- Fixes an issue that could prevent Apple TV Remote from pausing video, controlling video, or changing volume on supported receivers
- Addresses an issue that could cause calls made using Wi-Fi calling to drop
- Fixes an issue where song information from a connected iPhone may not appear in a car’s display

When Apple's Apple TV+ service launches this fall, you'll be able to watch all of Apple's original TV shows and movies in the TV app as well as existing content.

maverick28
Who the **** needs AppleTV? What about bug fixes and stability improvement? Jesus!
Score: 37 Votes (Like | Disagree)

otternonsense
Which is of no value whatsoever to non subscribers or users outside of the US of A.

Is there anything else that's worthwhile in this update?
Score: 27 Votes (Like | Disagree)

...If only the release notes attached to the end of the article said, "This update also includes bug fixes and improvements." Kelly Clarkson!
Score: 21 Votes (Like | Disagree)

Positivity and cognitive thought as always on MacRumors comments I see.
Score: 14 Votes (Like | Disagree)

Hey, thanks for speaking for everyone. I'm personally looking forward to this feature and want it very much.
Score: 11 Votes (Like | Disagree)

Apple always adds bug fixes etc... the problem is they SUCK at release notes. The should have detailed release notes with bug ID and fixed etc... no different that other companies like Cisco, etc
Score: 10 Votes (Like | Disagree)
Read All Comments