Apple has opened a new lab that will study how it can expand upon its current recycling processes through machine learning and robotics. The company announced the news today, along with other environmentally-focused updates, including that it will quadruple the number of locations where United States customers can send their iPhone to be disassembled by its recycling robot Daisy in a major expansion of its recycling programs. 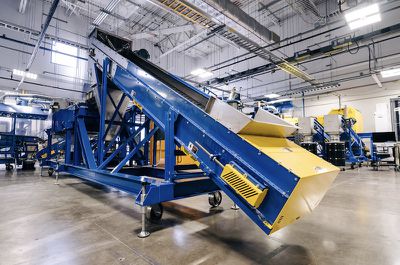 In regards to its new lab, Apple is calling it the "Material Recovery Lab" and says that it will be dedicated to looking for innovative solutions that will improve on traditional methods of recycling. The lab will work with Apple engineering teams and members of academia to address and propose solutions to current recycling challenges. The 9,000 square foot lab is located in Austin, Texas.

The recycling expansion also includes select iPhones returned to Best Buy stores throughout the United States and KPN retailers in the Netherlands. With the Apple Trade In program, those interested can also turn in their eligible devices to be recycled at any Apple Store or on Apple.com.

Apple says that Daisy can now disassemble 15 different ‌iPhone‌ models at the rate of 200 per hour, and after materials are recovered from the robot they are recycled back into the manufacturing process. Apple has received nearly 1 million devices through its recycling programs and each Daisy robot can disassemble 1.2 million devices each year.

In 2018, the company refurbished more than 7.8 million Apple devices and helped divert more than 48,000 metric tons of electronic waste from landfills.

“Advanced recycling must become an important part of the electronics supply chain, and Apple is pioneering a new path to help push our industry forward,” said Lisa Jackson, Apple’s vice president of Environment, Policy and Social Initiatives. “We work hard to design products that our customers can rely on for a long time. When it comes time to recycle them, we hope that the convenience and benefit of our programs will encourage everyone to bring in their old devices.”

Lastly, the company has released its 2019 Environment report with more information on its climate change solutions. These include Apple's recent announcement that 44 of its suppliers -- like Foxconn and Wistron -- have committed to 100 percent renewable energy for their production of Apple products.

To celebrate Earth Day on April 22, Apple will have environmentally themed Today at Apple sessions at all Apple Stores, feature original stories and app collections on the App Store, and run an Earth Day Apple Watch challenge. The company will also support the efforts of non-profit organizations like Conservation International, SEE Foundation, and The Recycling Partnership, which are all focused on protecting and preserving the environment.

The front page of Apple.com has been updated as well, prompting visitors to learn more about Apple and its environmental efforts.

Offer parts to 3rd party repair centres so they can fix stuff Apple or AASP refuse to fix.
Score: 26 Votes (Like | Disagree)

BootsWalking
The best way to improve recycling efforts is to avoid the need for recycling in the first place, ie manufacture devices with easily replaceable parts, including batteries and screens.
Score: 16 Votes (Like | Disagree)

Offer parts to 3rd party repair centres so they can fix stuff Apple or AASP refuse to fix.

Look at the MacBook Pro. Even for the simplest repair, Apple requires replacing half the computer.
Score: 12 Votes (Like | Disagree)

Does Apple use post-consumer aluminum for iDevices and Macs? They should! Promoting "recyclable" is good but companies need to use that material for products, not using virgin materials. Apple can clearly lead the way on this. We should all be able to say "this iPhone is made from 100% recyclED aluminum and the quality is exactly the same as new-AL iPhones".

They do this with the new MacBook Air, and the Mac mini. 100% recycled aluminum.
Score: 10 Votes (Like | Disagree)

Peperino
If Apple care so much about environment, they should stop making disposable non-upgradable appliances (especially computers).

Start by creating less trash. Any minor repair in a Macbook requires to replace the entire computer.

Really? And do those individual parts not need to be recycled themselves? Can they just be thrown away instead because they are "smaller"? Whatever the "thing" is, a complete top half of a laptop, or just the screen itself, it needs to be recycled or thrown away. Improving of the recycling process itself, so that more things can be recycled more efficiently, is needed for either scenario to improve.

Sure, making parts replaceable will help, but I do not believe its the best way. Better recycling helps overall. Should they do both? Sure, I think that would be good, but its a whole process, and needs to be seen as a whole process to have a larger impact.

What Apple is doing is a marketing stunt.
Although recycling efforts are great, the way they are currently designing computers creates more trash. And the first step to reduce recycling is starting at the source, creating computers that can be easily repaired/upgraded.
Score: 9 Votes (Like | Disagree)
Read All Comments