The next iPhone XS Max and possibly ‌iPhone‌ XS will feature a triple-lens rear camera system within a square bump like the Huawei Mate 20 Pro, according to Japanese blog Mac Otakara, citing information from Chinese suppliers. The report includes a few renders of what the new design could look like. 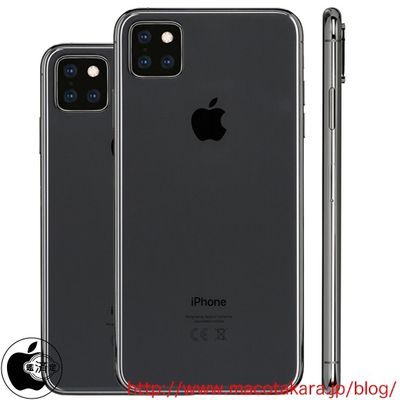 Render via Mac Otakara
The renders are largely consistent with earlier ones shared by OnLeaks, who also expects at least one 2019 ‌iPhone‌ to have a triple-lens rear camera. One difference is that the camera lenses are more symmetrically aligned in the renders above, whereas the lenses are asymmetrical in the OnLeaks render below.

Mac Otakara's sources claim Apple is readying official ‌iPhone‌ cases with "large holes" on the back, presumably for the square bump.

Many other sources have backed up the triple-lens camera rumor, including the well-connected Ming-Chi Kuo and Mark Gurman. Apple would be following in the footsteps of Android smartphone makers like Samsung and Huawei by adding a third lens, which should result in improved 3D sensing and other benefits.

Apple is expected to stick with 5.8-inch, 6.1-inch, and 6.5-inch displays for its 2019 ‌iPhone‌ lineup, with other rumored features including frosted glass casing, larger batteries, and bilateral charging of other devices like AirPods.

skinned66
Enough of the "thinness wars;" can we just get a phone with a flat back again please?
Score: 49 Votes (Like | Disagree)

thasan
Why can’t the phone be thicker in other places so that we get a decent battery?
Score: 29 Votes (Like | Disagree)

Brett.F
Kind of sets off my Trypophobia
Score: 24 Votes (Like | Disagree)

johnyslats
The report also suggests the triple camera system could only be offered on higher storage capacity models. If Apple can’t offer the new camera system on a £1099 64GB Max variant then quite frankly I’m done with Apple. Price gouging at it’s finest. 64GB has been more than sufficient as I’m heavily invested in iCloud/Apple Music and I’m sure many others feel the same
Score: 23 Votes (Like | Disagree)

Diamond Dog
I actually kinda wish they'd do what Samsung did with the S10 phones and do a horizontal arrangement centered in the middle. Tired of my iPhones always wobbling when I use them on flat services!
Score: 19 Votes (Like | Disagree)
Read All Comments