In a note to investors about Apple supplier Luxshare's predicted market share released this morning, Kuo included a chart that suggests Apple will continue to offer 5.8 and 6.5-inch OLED iPhones in 2019, along with one 6.1-inch LCD model. 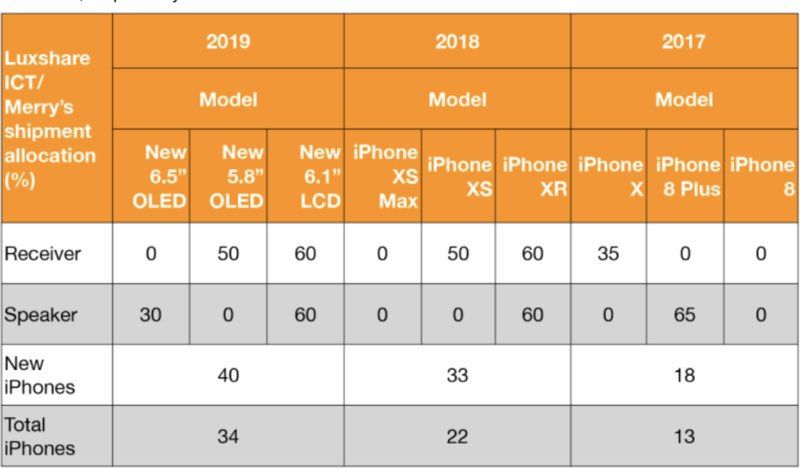 That's the same lineup used this year, which consists of the 5.8 and 6.5-inch OLED iPhone XS and XS Max and the 6.1-inch iPhone XR.

Rumors about the 2019 iPhones have been circulating for a few months now, but this is the first time that we've heard specific details on the number of devices we can expect to see in 2019 and their screen sizes.

Given that 2018 is sort of an "S" upgrade year with no major changes to the iPhone X design introduced in 2017, there was a possibility that Apple could condense its iPhone lineup or introduce new screen sizes, but it looks like we may be sticking with the current lineup for at least another year.

Details about all of the rumors we've heard about the new devices so far can be found in our 2019 iPhones roundup.

PhilHo
Thus it will be another year with the SE. No compromises, no regrets
Score: 10 Votes (Like | Disagree)

sos47
an „iPhone XR Min“ please. As a successor of the iPhone SE
Score: 7 Votes (Like | Disagree)

WarHeadz
That Xr is about to sell like hot cakes. As someone who owns a third party repair shop I’m thankful because those OLED screens are so expensive that people who don’t have some form of insurance just live with the crack and don’t fix them. We don’t do a lot of iPhone X repairs.
Score: 7 Votes (Like | Disagree)

AngerDanger
Wish I could preorder already…