Apple today expanded its "There's More to iPhone" marketing campaign to France and the United Kingdom after launching it in Germany late last year. 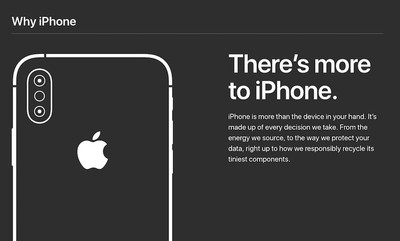 A new "Why iPhone" page on Apple's website in each country highlights reasons why an ‌iPhone‌ is "more than the device in your hand," ranging from Apple's environmental responsibility to iOS 12 performance improvements to the privacy of features such as Face ID, Apple Maps, and, yes, FaceTime.

Each reason in the list can be expanded to view additional information. Here's what Apple says about protecting user data for example:

At Apple, we believe that data privacy is a fundamental human right. Your personal data belongs to you and no one else.

And while some companies sell your data, we don't. We'll tell you if we collect your data and let you know how it's used. For instance, we may utilize that data to make ‌iPhone‌ more user friendly. And you can always change your settings to limit the amount of information that can be accessed.

The marketing campaign is prominently featured on the ‌iPhone‌ page of Apple's website in France, the United Kingdom, and Germany. It has yet to launch in the United States or any other countries we checked.

Apple has been heavily promoting iPhone XR and iPhone XS trade-ins with a prominent banner on the homepage of its website, store signage, App Store editorials, emails to older ‌iPhone‌ users, and more. Apple provided its first revenue warning in 16 years last quarter due to "fewer ‌iPhone‌ upgrades" than it anticipated.

So, just another ad of self-promotion then. Talk about pretentiousness.

ArtOfWarfare
It's really disappointing that this is what Apple has become. Gone are the funny and memorable ads. Gone are the products worth buying. Now we just have lousy ads pushing ludicrously overpriced products with minor improvements from prior generations.

At this point I'm thinking Apple is going to have to offer a folding 5G iPhone before I upgrade from my 6+.
Score: 16 Votes (Like | Disagree)

So, just another ad of self-promotion then. Talk about pretentiousness.

Um, it's called selling your product.

Apple is a business, remember?
Score: 14 Votes (Like | Disagree)

GeoStructural
The more Apple keeps taunting the “we are private, we are secure unlike the competition”, the more it will hit them when they get their blow.

There is no way Apple is not capitalizing and collecting data from its massive user base.
Score: 8 Votes (Like | Disagree)

So Apple wouldn’t market their products unless Samsung released the S10?

Stop trying to make everything Apple does a reaction to something else.
Score: 6 Votes (Like | Disagree)

usersince86
Love this about Apple.
Score: 6 Votes (Like | Disagree)
Read All Comments

Tuesday July 7, 2020 6:49 pm PDT by MacRumors Staff
Apple is planning on launching the iPhone 12 this fall which is rumored to be coming in 3 different sizes: 5.4", 6.1" and 6.7". The middle size (6.1") matches up with the currently shipping iPhone 11, but the other two sizes will be entirely new. Over the weekend, there was some excitement about how well the new 5.4" iPhone 12 compares to the original iPhone SE. Those who have been hoping...
Read Full Article • 139 comments

Wednesday July 8, 2020 9:35 am PDT by Joe Rossignol
Despite multiple reports indicating that Apple will not include EarPods or a wall charger with iPhone 12 models this year, one analyst believes that pricing will still increase slightly compared to the iPhone 11 lineup. In a research note provided to MacRumors, analyst Jeff Pu forecasted that iPhone 12 pricing will start at $749 for a new 5.4-inch model, an increase of $50 over the base...
Read Full Article • 256 comments