iPhone SE is Again Available From Apple's Clearance Site for $249

Apple is once again offering the iPhone SE on its clearance site, making the now-discontinued device available for $249 to $299.

You can purchase the 32GB ‌iPhone SE‌ in Gold, Space Gray, Silver, or Rose Gold for $249, and the 128GB ‌iPhone SE‌ is also available for $299 in all colors. 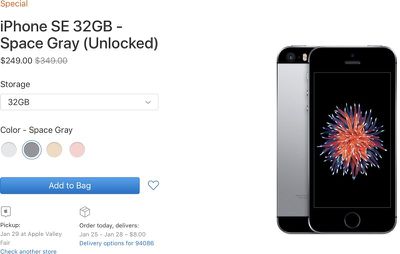 The ‌iPhone SE‌ models Apple has available are discounted by $100 for 32GB of storage and $150 for 128GB of storage. The iPhones for sale are unlocked and brand new in box.

Apple originally discontinued the iPhone SE in September 2018 when the iPhone XS, XS Max, and XR were announced. Apple's ‌iPhone‌ lineup now starts with the ‌iPhone‌ 7 and 7 Plus as its entry level devices.

The ‌iPhone SE‌, first announced in March 2016, was the last 4-inch smartphone that Apple offered, with the 4.7-inch ‌iPhone‌ 7 and ‌iPhone‌ 8 models now the smallest that Apple officially sells in retail stores.

Apple added discounted iPhone SE models to its clearance store on January 19, but available stock quickly sold out. Apple refreshed the store this afternoon to add additional supply, though what's in stock now could also potentially sell out quickly.

We don't know for sure why Apple is selling the ‌iPhone SE‌ again, but it's likely that Apple is clearing out remaining ‌iPhone SE‌ stock.

In 2018, there were rumors suggesting Apple was working on an iPhone SE 2, but in hindsight, some of the rumors were conflated with ‌iPhone‌ XR rumors and no second-generation 4-inch device materialized.

Apple analyst Ming-Chi Kuo, who often provides accurate insight into Apple's plans, said in early 2018 that an ‌iPhone SE‌ 2 was unlikely, and other analysts have also suggested Apple no longer has plans to produce a new 4-inch model.

Was issued a SE for work. Horrible phone, so small it’s like a little toy.

The SE is the best phone they've ever made (for me). Their latest range are like massive tablet toys.
Score: 42 Votes (Like | Disagree)

Pepe4life
Tim Cook is a fool for abandoning the small form factor iPhone, there is clearly a sizeable demand for it.
Score: 34 Votes (Like | Disagree)

GuruZac
I really want to buy the 128GB Space Grey model, but I can't justify it as I would rarely use it, but that's a great phone and a great deal. It's obvious that Apple needs to replace the SE with updated internals and cameras at the very least. Hell, keep the same form factor, but put the A11 or even A12, at least iPhone 8 camera, and Touch ID 2 solid state home button from the iPhone 7/8. Oh, and offer the Black form the iPhone 7 and bring on Product Red. Watch your iPhone sales increase Apple.
Score: 25 Votes (Like | Disagree)

Was issued a SE for work. Horrible phone, so small it’s like a little toy.

Was issued a 6s for work. Horrible phone, so large it's like a ping pong paddle.:rolleyes:
Score: 18 Votes (Like | Disagree)

AdonisSMU
Apple's greed is getting in the way of their brain. Give people the option for a smaller device. Many will buy it. Have a small medium and large model. How simple is that?
Score: 17 Votes (Like | Disagree)
Read All Comments

Monday August 8, 2022 10:43 am PDT by Juli Clover
With the fifth beta of iOS 16, Apple has updated the battery icon on iPhones with Face ID to display the specific battery percentage rather than just a visual representation of battery level. The new battery indicator is available on iPhone 12 and iPhone 13 models, with the exception of the 5.4-inch iPhone 12/13 mini. It is also available on the iPhone X and the iPhone XS. Battery percent...
Read Full Article • 338 comments