Apple's upcoming iPad Pro models will feature a USB-C port instead of a traditional Lightning port, according to information gathered from accessory makers at the Global Source Mobile Electronics Trade Fair by Japanese site Mac Otakara.

The trade fair kicked off today and Mac Otakara heard "talk" from manufacturers attending the event about a switch to USB-C. 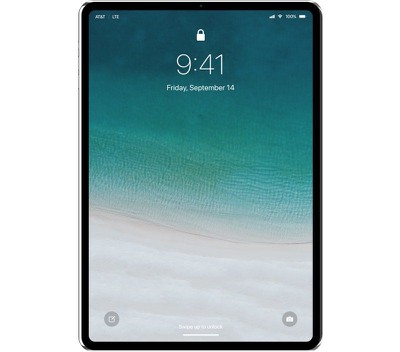 iPad Pro mockup by Álvaro Pabesio
This isn't the first time we've heard of Apple's plans to adopt USB-C instead of Lightning on its new iPad Pro models, which would further bridge the gap between mobile device and computer.

Apple analyst Ming-Chi Kuo, who often accurately predicts Apple's plans, said in September that Apple's 2018 iPad Pro models will use USB-C instead of Lightning. USB-C connectivity would enable new functionality, such as the ability to connect an iPad Pro to a 4K monitor.

Mac Otakara also says that manufacturers at the event were showing off a photo of the 2018 iPad Pro dimensions that was first shared on Slashleaks last week.

Apple's new iPad Pro models are rumored to feature a TrueDepth camera system for Face ID and no Home button. The new devices are expected to make their debut on Tuesday, October 30, at an event Apple is planning to hold in Brooklyn, New York.

macmyworld
If they are switching to USB C they could have done it with the new iPhones also. This just makes it for of a PIA when I travel.
Score: 17 Votes (Like | Disagree)

Porco
How about both? It’s big enough. Remember when ‘Pro’ meant you got more I/O options, not fewer?

(I don’t mean the option to buy overpriced dongles and adapters, I mean actually in the devices themselves...)
Score: 14 Votes (Like | Disagree)

Naimfan
USB-C would be a welcome addition. As long as it retains the headphone jack.
Score: 11 Votes (Like | Disagree)

AppleHaterLover
Good! It’s not like I’ve spent HUNDREDS OF DOLLARS in cables for my iPhones and iPad and bought a very expensive 2m USB-C to lightning literally just last month.

MrJeffreyGee
This new iPad is going to be a huge difference from my gen 1.
Score: 5 Votes (Like | Disagree)
Read All Comments