Apple today sent out media invites for a second major 2018 event set to be held in New York City on Tuesday, October 30 at the Brooklyn Academy of Music, Howard Gilman Opera House.

Apple's October event, which will focus on products not introduced at the iPhone-centric event in September, will kick off at 10:00 a.m. Eastern Time. 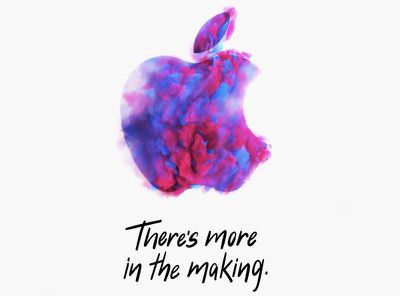 Image via Neil Cybart
Apple sent out multiple different Apple logo designs on the invitations that it sent out to members of the media, all of which feature the tagline "There's more in the making."

Image via Todd Haselton
We're still awaiting multiple product refreshes before the end of 2018, including updates to several Mac models and the iPad Pro, which are likely to see a debut at the event.

Image via Lance Ulanoff
2018 iPad Pro models are expected to adopt an iPhone X-style design with no Home button, slimmer bezels, and a TrueDepth camera system that will enable Face ID for biometric authentication.

Image via Joanna Stern
While the iPad Pro is expected to continue to use an LCD rather than OLED due to the high price of OLED displays, rumors suggest it could adopt a USB-C port instead of a Lightning port and that the headphone jack could potentially be eliminated.

2018 iPad Pro mockup by Álvaro Pabesio
Along with new iPad Pro models, we're also expecting refreshes to the MacBook line. Refreshed 12-inch MacBooks are said to be in the works, and based on rumors, Apple has developed a low-cost notebook with a Retina display that could be positioned as an updated MacBook Air.

The Mac mini, which has not been updated for more than 1,400 days, is expected to be refreshed for the first time since 2014. We don't know a lot about what to expect for the Mac mini update, but upgraded internals and faster processors are a sure thing.

It's possible that at this iPad and Mac-focused event, we'll also hear more about the modular Mac Pro that Apple is working on for a 2019 debut.

Apple's 2018 keynote event will begin at 10:00 a.m. Eastern Time. Apple typically streams the event live on its website and on Apple TV, but for those who are unable to watch, MacRumors will be providing full event coverage both on MacRumors.com and through our MacRumorsLive Twitter account.

Martius
This is a crucial keynote for Apple. It will show us their direction for next few years. If there is nothing interesting (nice tech for a reasonable price), I will have to get out of the ecosystem.
Score: 102 Votes (Like | Disagree)

The handwritten-style text is easy: definitely a new iPad and probably a new pen. The colours are a little more difficult.

I ran the image through an in-house AI to analyse every hex code contained in the image, including the background grey (#F8F8F8). 143 separate colours were detected. Using an algorithm to discern the median of the bi-linear interpolation, sequenced with the quadrature of the Gaussian noise, I just had to finally convert the exported topology via a histogramic equalisation to render as a hyperfocal image.

The results are below.

Thank goodness. The whiners in these forums will give it a break until Oct 30 11:01am (1 min after the event ends)

You know, when Apple literally has machines that haven't been touched in 4 years, it's really not fair to call people whiners. There are certain expectations about tech products that Apple has been neglecting in regard to their computers. It's not whining.
Score: 49 Votes (Like | Disagree)

mikeb13
I wonder why this is in NYC and not at Apple HQ like all other events.
Score: 33 Votes (Like | Disagree)

zahuh
Yes! I feel like a kid! These invites never get old.
Score: 32 Votes (Like | Disagree)
Read All Comments