Upcoming 2018 iPad Pro Could Be 5.9mm Thick With No Headphone Jack

Apple's upcoming iPad Pro could be one of its thinnest devices yet, measuring in at just 5.9mm thick, based on details shared by a leaker on Twitter who previously provided accurate details on the iPhone XS and XR ahead of launch.

According to Twitter user CoinCoin, the upcoming iPad Pro will measure in at just 5.9mm, and due to its thinness, there will be no room for Apple to include a headphone jack.

Of course no headphone jack on the upcoming new iPad. 5.9mm thickness is pretty good though. — CoinCoin (@coiiiiiiiin) October 12, 2018 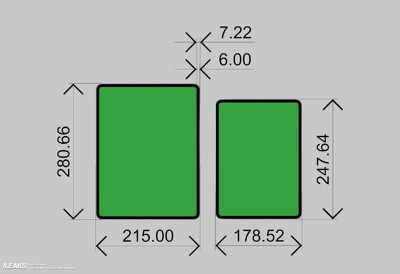 It is also in line with current iPad Pro measurements. The existing 10.5-inch iPad Pro is 6.1mm thick, so it would make sense for a new model to be somewhat thinner.

It's likely the 5.9mm estimate applies to the smaller of the two 2018 iPad Pro models that Apple is expected to introduce, which could be somewhere around 10.5 to 11 inches in size. Apple's current 12.9-inch iPad Pro is thicker than the 10.5-inch version, measuring in at 6.9mm thick.

Bezels on the new tablets could measure in right around 6mm at the top, bottom, and sides, with the 7.2mm measurement on the Slashleaks document perhaps referring to bezel thickness with side button included.

Multiple prior rumors have indeed suggested that the next-generation iPad Pro models will feature slimmer bezels all the way around, with the top bezel housing a TrueDepth camera system for Face ID. The bottom bezel is slimmer than in existing models because Apple plans to remove the Home button.

Coming back to the prediction of no headphone jack, this isn't the first time we've heard that rumor. Back in July, Mac Otakara also said that the upcoming iPad Pro models will not include a headphone jack. iPhone models have not offered a headphone jack since the iPhone 7, with Apple instead encouraging customers to use Bluetooth headphones like the AirPods or Lightning-based solutions.

The info shared on Slashleaks is likely from a case maker and because it's supported with data obtained from other sources, it's quite possibly accurate. Aside from the dimensions of the new iPad Pro models, the info also confirms the presence of a new Smart Connector at the back of the two tablets.

Other 2018 iPad Pro rumors suggest the device will feature a USB-C port instead of a Lightning port, a faster A12X chip, and support for a second-generation Apple Pencil.

It's not clear when the new iPad Pro models will be announced, but their debut is likely coming soon. We're expecting Apple to hold an event at some point in October, with the end of October looking like the most probable option.

Mark Holmes
Sorry, but Apple has no business calling this "Pro" if they pull the headphone jack. They would be much better off pulling their heads out of their a%^&s than the headphone jack from something that audio and video professionals are supposed to use.
Score: 112 Votes (Like | Disagree)

dannyyankou
I don't care about shaving .02mm off the thickness, I'd rather have a battery that's .02 mm thicker
Score: 110 Votes (Like | Disagree)

Good. No one uses headphones on an ipad anyway. If you want to use headphones u should just buy the $160 EarPods.

No. YOU don't use headphones on an iPad. There are 7 billion people on this planet. You do not speak for anyone but yourself.
Score: 104 Votes (Like | Disagree)

Asarien
Y'know, I can buy their cock and bull about needing the internal space on an iPhone, but iPads are larger and are utilized in a significantly wider scope of scenarios, some of which uses the headphone jack to output audio without the need of toting additional dongles or adapters.

But whatever. This company is deep in their bubble and stopped caring about real-world usage long ago.
Score: 92 Votes (Like | Disagree)

OldSchoolMacGuy
More people will be mad about the lack of a headphone jack than the number of people who would have used the jack if it were included.
Score: 90 Votes (Like | Disagree)

Good. No one uses headphones on an ipad anyway. If you want to use headphones u should just buy the $160 EarPods.

No one??? Really? Because I see people using wired headphones while traveling on Planes all the time.
Score: 75 Votes (Like | Disagree)
Read All Comments