HomePod Sales May Be Closer to 1-1.5 Million Than 3 Million Since the Speaker Launched

HomePod shipments totaled an estimated 700,000 units in the second quarter of 2018, giving Apple a roughly six percent share of the worldwide smart speaker market, according to research firm Strategy Analytics. 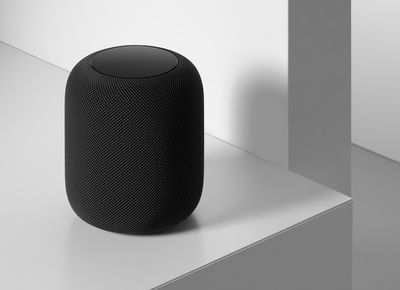 Strategy Analytics previously estimated HomePod shipments totaled 600,000 units in the first quarter of 2018, suggesting that worldwide shipments have reached 1.3 million units since the speaker became available to order in the United States, Australia, and the United Kingdom in late January.

That figure is much lower than one shared by research firm Consumer Intelligence Research Partners, which recently estimated Apple has sold three million HomePods in the United States alone since the speaker launched.

The significant variance in the datasets stems from the fact that Apple doesn't disclose HomePod sales, instead grouping the speaker under its "Other Products" category in its earnings reports, alongside the Apple Watch, Apple TV, AirPods, Beats, iPod touch, and other Apple and third-party accessories.

Apple reported revenue of $3.74 billion from its "Other Products" category last quarter, up 37 percent from $2.73 billion in the year-ago quarter.

Shipments aren't sales, either, so it's impossible to know exactly how many HomePods ended up in the hands of customers.

If we had to guess, we'd say the Strategy Analytics numbers are probably more within the ballpark, as the HomePod is a niche product. The speaker is also available in just six countries, after launching in Canada, France, and Germany in June, with no indication when availability may expand to other regions.

HomePod was the world's fourth most popular smart speaker in the second quarter, behind the Amazon Echo, Google Home, and Chinese company Alibaba's Tmall Genie, according to Strategy Analytics.

While the HomePod has made somewhat of a dent, Apple still has significant ground to make up, which is to be expected given its smart speaker launched around two to three years after its biggest competitors.

It may be tough for Apple to gain further market share unless it releases a more competitively priced model, as the HomePod at $349 is considerably more expensive than the Amazon Echo, priced from $50, and the Google Home, $129.

To that end, rumors suggest Apple may have a lower-priced HomePod or a Siri-enabled Beats speaker in its pipeline.

sunapple
Why are we still comparing the HomePod to a 50$ Echo? It’s a voice assistant “speaker” versus a real music speaker that also has Siri.
Score: 30 Votes (Like | Disagree)

Here's out random guess which may or may not be more accurate than the other random guesses.

1. Siri is limited
2. Pricy compared to other smart speakers (not necessarily to other high end dump speaker tho).

We picked up the HomePod shortly after the launch, it was a terrible experience with Siri. In fact, my wife was so upset with it she stopped using it all together. So, I took it back and picked up the Google Home Max. It has some serious distortion at the 80%-100% volume range. However, it is so ridiculously loud at that range we have never crossed the 75% range in our home. Even with the distortion issue at the higher volume it is a superior experience because of the google assistant.

We don't use it for much more than music, interaction with our smart home tech, and timers for cooking. Siri wouldn't allow multiple timers a no go for anyone doing true cooking. Plus, Siri rarely proves useful. Apple's failure in the smart speaker market is due largely to Siri.

Price can be a contributor but was not for us, it all came down to the assistant driving the speaker.

Coming from a guy who has iMac 5k 2014, MacBook Pro 15" 2016, iPhone X, iPad Pro 10.5" (current), AirPods, Apple Watch 3rd Gen LTE, Apple TV 4k and Apple TV fourth gen. I wanted the HomePod to knock it out of the park. Unfortunately, it simply didn't. If Siri is improved, I will sell my Max and get the HomePod. Until then, my wife and I will live with the google spy in our living room.
Score: 15 Votes (Like | Disagree)

1. Siri is limited
2. Pricy compared to other smart speakers (not necessarily to other high end dump speaker tho).
Score: 14 Votes (Like | Disagree)

Morgenland
Gloomy whining. I have some HomePods and I am the happiest music listener in the world. That's why I'm not interested in all this talk.
Score: 14 Votes (Like | Disagree)
Read All Comments