Apple this weekend participated in the annual San Francisco Pride Parade, as part of its longstanding support of the LGBTQ community. 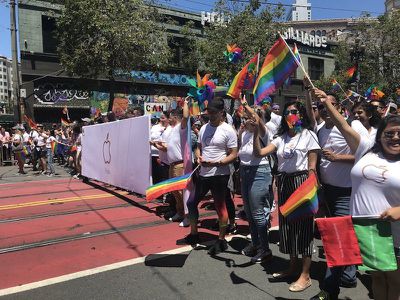 Happy Pride to the Apple employees marching today in San Francisco and to everyone celebrating #Pride2018 across the country! pic.twitter.com/UUoZDAWjnC — Tim Cook (@tim_cook) June 24, 2018

Apple also had a dedicated area at One Market Plaza where people could leave their signature or a message, take Animoji photos, and more.

Apple has been celebrating Pride throughout the month of June, introducing a new Pride-themed Apple Watch band and watch face at WWDC. The company routinely supports laws that protect LGBTQ rights, and opposes laws that discriminate.

Note: All forum members and site visitors are welcome to read and follow this thread, but commenting is limited to forum members with at least 100 posts.

kildraik
I keep wondering what Apple is actually doing these days.

Seems like a liberal’s dream. Little work, lots of pride, and a bunch of pissed off customers in its wake.
Score: 149 Votes (Like | Disagree)

bladerunner2000
Cook would be a better activist than CEO of a multi billion dollar company. Try making a good computer Tim, you guys have made total garbage for the last 5 years. How's that Mac Pro coming along?
Score: 70 Votes (Like | Disagree)

Is any of this stuff even having an effect on our society?

LGBT rights around the world in the last 10 years....big difference.
Score: 46 Votes (Like | Disagree)

I keep wondering what Apple is actually doing these days.

Seems like a liberal’s dream. Little work, lots of pride, and a bunch of pissed off customers in its wake.

- Designing mobile chips that is arguable the most efficient one to date.
- Designing a family of mobile chips to complement the bet in mobile (Sx, Wx, etc).
- Designing biometric security rivaling Hollywood motion capture in a size of your pocket (FaceID)
- Designing AR ecosystem, complete with mobile APIs and software+hardware integration
Just to name a few.

Steve Jobs removed "computer" from the company's name long time ago. Apple is a technology company, not a PC company.
[doublepost=1529903584][/doublepost]

Cook would be a better activist than CEO of a multi billion dollar company. Try making a good computer Tim, you guys have made total garbage for the last 5 years. How's that Mac Pro coming along?

AtomicGrog
Just the first few posts show how contentious the subject is... am not into this stuff myself (LGBQTXYZ) and am happy provided it's not shoved down my throat, for this thread I skipped the article and went to the thread for the lols
Score: 33 Votes (Like | Disagree)
Read All Comments