Apple's process of modernizing its chain of over 500 retail stores continues in several major cities around the world.

Over the weekend, Apple celebrated the grand opening of its relocated Beverly Center store in Los Angeles. Apple's original store in the shopping mall, opened November 2005, permanently closed at the end of Friday.

Apple's new Beverly Center store via Instagram
Apple's remodeled stores often gain additional square footage to accommodate an increased number of both products and customers. The extra space is also beneficial to Today at Apple sessions related to photography, coding, exercising with the Apple Watch, and other topics.

Apple recently announced that its flagship Covent Garden store in London will be closed starting June 27 to allow for renovations to be completed. Of note, this location became Apple's largest store when it first opened in 2010, although it has since ceded the title to a newer store in the United Arab Emirates.

A sign at Apple Covent Garden tipped by a MacRumors reader
Likewise, 9to5Mac's Michael Steeber reported that Apple Wangfujing in Beijing will be closed for renovations starting June 24.

Elsewhere in the Greater China region, Apple has revealed that it will be opening a second store in Macau, along the Cotai Strip, an area with several hotels, casinos, and resorts, earning it the nickname of the Las Vegas of Asia. Apple has yet to specify an exact opening date, but it could be within the next month.

Apple's banner for its second store in Macau via MacRumors reader Chris Gooda
Apple's renovation efforts continue at its iconic Fifth Avenue store in Manhattan, and at its Palo Alto store, often visited by Apple CEO Tim Cook on product launch days due to its close proximity to Apple's headquarters.

Update: As noted by a MacRumors reader, Apple Causeway Bay in Hong Kong is also undergoing renovations, although the store remains open.

Update 2: Apple has announced on its store page for the Cotai Central location in Macau that the grand opening will be June 29.

matt_and_187_like_this
apple's product changes have been so miniscule in the past years that the value of these stores has decreased significantly. for me it is basically zero.
Score: 14 Votes (Like | Disagree)

ChrisCW11
You can tell its modern by how white the walls are and how little products are on display.
Score: 10 Votes (Like | Disagree)

Mac innovation isn't going to be as obvious because the product life cycle is longer and the size of the business is relatively smaller. Computers/Laptops are going to get updated processors and software, but they aren't going to move as fast as mobile and wearables.

I think Apple has done a phenomenal job managing the business. You don't innovate so fast that you lose sales. You slowly release features and market them to maximize sales. That's business. It's working, btw. If people buy and are satisfied with incremental innovations, it is smarter to release them as needed and when the features are fully vetted...not just innovating to innovate.

In many ways, Apple is beholden to Intel. I suspect that will change within the next two years.
Score: 3 Votes (Like | Disagree)

The entire company is more valuable today than ever before, so it kind of refutes your thesis.

The value of the company and how good it's products are aren't mutually inclusive. matt_and_187_like_this ('https://forums.macrumors.com/members/matt_and_187_like_this.1007624/') is correct that Apple's product changes especially in regards to Mac have been demonstrably non-innovative and utterly lackluster since the round Mac Pro came out in 2013.
Score: 2 Votes (Like | Disagree)

You can tell its modern by how white the walls are and how little products are on display. 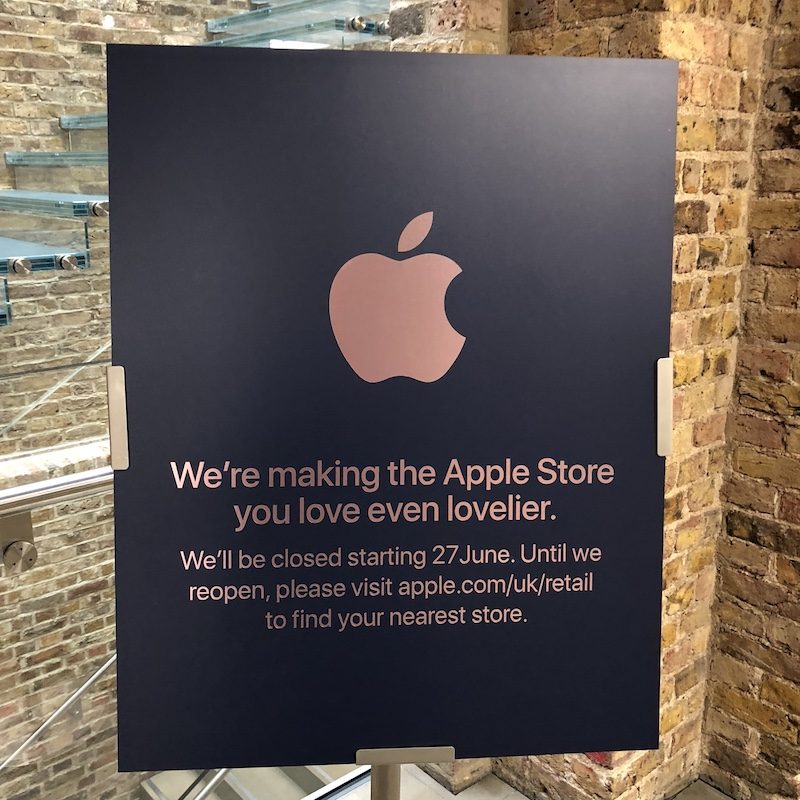 apple's product changes have been so miniscule in the past years that the value of these stores has decreased significantly. for me it is basically zero.

The entire company is more valuable today than ever before, so it kind of refutes your thesis.
Score: 1 Votes (Like | Disagree)
Read All Comments

Wednesday September 16, 2020 2:36 am PDT by Tim Hardwick
Apple's official public release of iOS 14 and iPadOS 14 dropped on Wednesday, September 16, just a day after the company released the Golden Master to third-party developers. Also set to be made available to the general public for the first time are watchOS 7 and tvOS 14. Getting Started With iOS 14 Video Click image to watch iOS 14 Getting Started While that's left a lot of developers...
Read Full Article • 1225 comments

Wednesday September 16, 2020 12:48 pm PDT by Juli Clover
Apple has released iOS 14 and iPadOS 14, the newest operating system updates designed for the iPhone and iPad. As with all of Apple's software updates, iOS 14 and iPadOS 14 can be downloaded for free. iOS 14 is available on the iPhone 6s and later, while iPadOS 14 is available on the iPad Air 2 and later. The updates are available on all eligible devices over-the-air in the Settings app. To ...
Read Full Article • 479 comments

Tuesday September 15, 2020 12:26 pm PDT by Juli Clover
Apple today announced Apple One, a series of new subscription bundles that provide access to various Apple services at a combined monthly price. In response, Spotify sent out statements (via Peter Kafka) to the press decrying Apple's anti-competitive behavior and calling on "competition authorities" to stop Apple before it is able to cause "irreparable harm" to developers.Once again, Apple...
Read Full Article • 408 comments

Tuesday September 15, 2020 11:06 am PDT by Joe Rossignol
Apple today announced that iOS 14, iPadOS 14, watchOS 7, and tvOS 14 will be officially released on Wednesday, September 16. Apple has seeded the final Golden Master beta versions of each update to developers in advance. ‌iOS 14‌ and iPadOS 14 introduce dozens of new features, including a redesigned Home Screen that supports widgets on the iPhone and iPad for the first time. For more...
Read Full Article • 124 comments

Monday September 14, 2020 12:22 pm PDT by Juli Clover
The new 3A283 firmware that Apple released for the AirPods Pro today appears to introduce support for Spatial Audio, a new feature coming to the higher-end AirPods with iOS 14. Multiple reports on Twitter and the MacRumors forums indicate that the firmware update adds a "Spatial Audio" option to the Control Center, which can be activated to enable the feature. Note that using Spatial Audio...
Read Full Article • 418 comments

Tuesday September 15, 2020 8:46 am PDT by MacRumors Staff
Apple's virtual "Time Flies" event kicks off today at 10:00 a.m. Pacific Time, with Apple expected to debut new Apple Watch and iPad models, but it appears we may not see the iPhone 12 until next month. While we're not expecting to see new iPhones today, Apple's software updates for its various platforms are likely nearly ready for launch, so we may be hearing more about them today. Check...
Read Full Article • 980 comments

Tuesday September 15, 2020 2:19 pm PDT by Juli Clover
Apple today held its annual September event, but this year was a bit different because no new iPhones were announced. The "Time Flies" event focused on the Apple Watch Series 6 and the iPad Air, and saw the debut of a new Apple One services bundle. Subscribe to the MacRumors YouTube channel for more videos. It took Apple an hour to introduce the new devices, but we've recapped the event in...
Read Full Article • 132 comments