Apple will soon dismantle and remove the iconic glass cube entrance at its Fifth Avenue Apple Store in Manhattan, New York, which is in the process of being renovated and expanded.

On March 16, Apple filed a permit for the "full removal of the glass cubical structure at the Apple Store entrance," which, according to BuildZoom, was granted on April 17. The removal of the cube will cost Apple $2 million, and according to a second source, could commence on May 9. 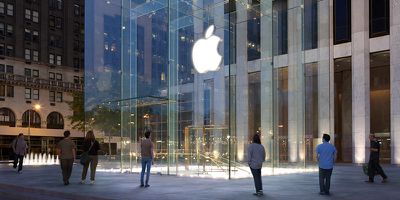 Apple is planning to expand its Fifth Avenue store to double the size of the original location. The store is growing from 32,000 square feet to 77,000 square feet, giving Apple more space at its flagship New York location.

It is not yet clear what Apple is planning to do with the cube. It could be temporarily removed to allow for construction underneath, or the company could have bigger cube renovation plans in mind.

This will be the second time the cube has been dismantled -- it was torn down in 2011 to allow Apple to reconstruct it from larger, more seamless glass panes. Prior to 2011, the cube was made up of more than 90 glass panes, but the new cube uses just 15.

While construction is underway at the new location, Apple has temporarily relocated the store to a nearby empty storefront that formerly housed the FAO Schwarz toy store.

Apple has not announced when the new store will be complete, but rumors suggest it will have some notable improvements, including a unique area for a Beats 1 radio station that will enable live in-store Beats 1 broadcasts.

OneZweiThree
How does the removal of the cube cost $2 million?
Score: 24 Votes (Like | Disagree)

now i see it
Maybe they'll replace the "cube" with a "cylinder".
Score: 20 Votes (Like | Disagree)

JPLC
The way I read it, this time the cube will not return? Idk but I sure hope not. This cube is a monument and its got Steve's name written all over it.
Score: 17 Votes (Like | Disagree)

Jakexb
Last time they rebuilt it, they reduced the number of pieces joined together. After their experience building Apple Park, I bet they could get it down to 1 piece per side and a carbon fiber roof.
[doublepost=1492632732][/doublepost]

How does the removal of the cube cost $2 million?

Tuesday October 4, 2022 3:30 am PDT by Hartley Charlton
The European Parliament today voted overwhelmingly in favor of enforcing USB-C as a common charging port across a wide range of consumer electronic devices, including the iPhone and AirPods, by the end of 2024. The proposal, known as a directive, forces all consumer electronics manufacturers who sell their products in Europe to ensure that a wide range of devices feature a USB-C port. This...
Read Full Article • 302 comments