Wednesday April 25, 2018 10:38 am PDT by Juli Clover
The iOS 11 operating system is installed on 76 percent of devices as of April 22, according to statistics Apple shared today on its App Store support page for developers.

iOS 11 adoption rates have been growing steadily, but adoption has been markedly slower than iOS 10. In February of 2017, for example, iOS 10 was installed on nearly 80 percent of active devices.

iOS 11 has been plagued by high-profile bugs and issues like the HomeKit bug, the Spectre and Meltdown vulnerabilities, and most notably, the iPhone slowdown controversy that saw Apple throttling the performance of older iPhones. Though not directly related to iOS 11, it's likely people shied away from updating after reading about the issue.

The 11 percent uptick in iOS 11 adoption from January to April can be attributed to the launch of iOS 11.2 in December and iOS 11.3 in March, both of which were major updates introducing key new features.

iOS 11.4, which is in the works, is another update that could spur adoption, as it will introduce Messages on iCloud and AirPlay 2 if the features currently in testing make it into the release.

Customers may be wary of iOS 11, leading to somewhat slower adoption rates, but Apple's iOS 11 install base is beyond impressive compared to Google's adoption numbers for its latest operating system update. 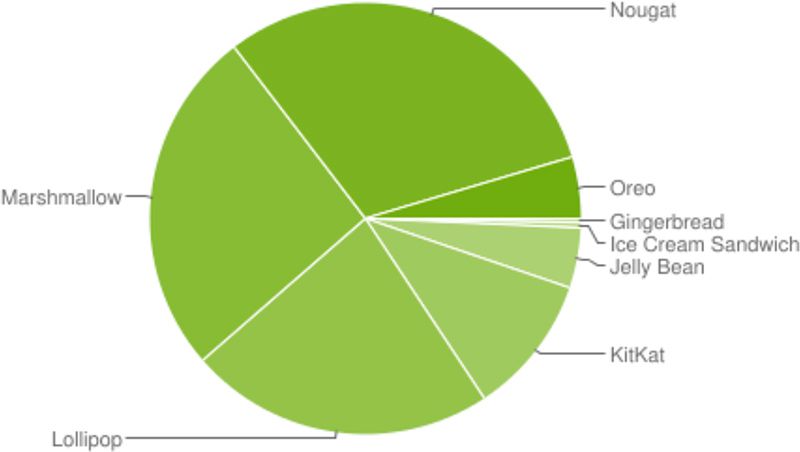 As of April 16, just 0.5 percent of Android devices are running the newest version of Android Oreo, and only 4.6 percent of devices total have Oreo installed. The majority of Android users continue to run Android Lollipop, Marshmallow, and Nougat, operating systems that came out in 2014, 2015, and 2016, respectively.

As if there isn't Apple bashing here? And remember, it's an APPLE site.

4% of the devices having the newest OS on Android is the PERFECT stat for one of the biggest problems with Android. It's not bashing...it's true.

technole
With 13 releases of iOS 11. It's kind of hard not to be on it, since your Apple device gets cranky and asks you to upgrade non-stop. Unless your device does not support it.

Plus there is WatchOS 11.3, or HomePod which requires iOS 11. So the more deeper you are in the ecosystem, you can't avoid it.
Rating: 41 Votes

JohnnyApple$eed
I'm starting to think that having old versions of an OS running is not a bad thing. Going to iOS 11, I see a huge decline in performance on my iPhone 6. I assume that it's pretty difficult to create an OS meant for new hardware but still able to support old hardware efficiently. JMO If i could go back to iOS 10 I would.
Rating: 27 Votes

Roller
The Android stats made me hungry. The pie chart made that worse.
Rating: 21 Votes

brentsg
I wish Apple would stand down and let me click a once and for all button.. not upgrading my current devices to iOS11. I'm way beyond sick of them insisting.
Rating: 21 Votes

Stella
If you are using iOS, why do you give a **** about the installation base of other mobile OS's?

Its just sad excuse to have a big wank.
Rating: 17 Votes

Pagemakers
iOS 11 is the buggiest iOS I’ve installed ever I think. Even 11.3 is poor on my X and iPad Pro.
Rating: 14 Votes

Breaking Good
As an owner of a Samsung Galaxy S8+, I wish Google and the Android OEM’s were embarrassed by these metrics. But sadly, they are not.
Rating: 13 Votes