Apple Says iOS 11 is Installed on 52% of Devices

Tuesday November 7, 2017 2:11 pm PST by Juli Clover
iOS 11 is now installed on 52 percent of iOS devices, according to new statistics that Apple shared today on its App Store support page for developers.

This is the first time that Apple has updated its App Store support page since the release of iOS 11, and the first look we've had at official installation numbers. 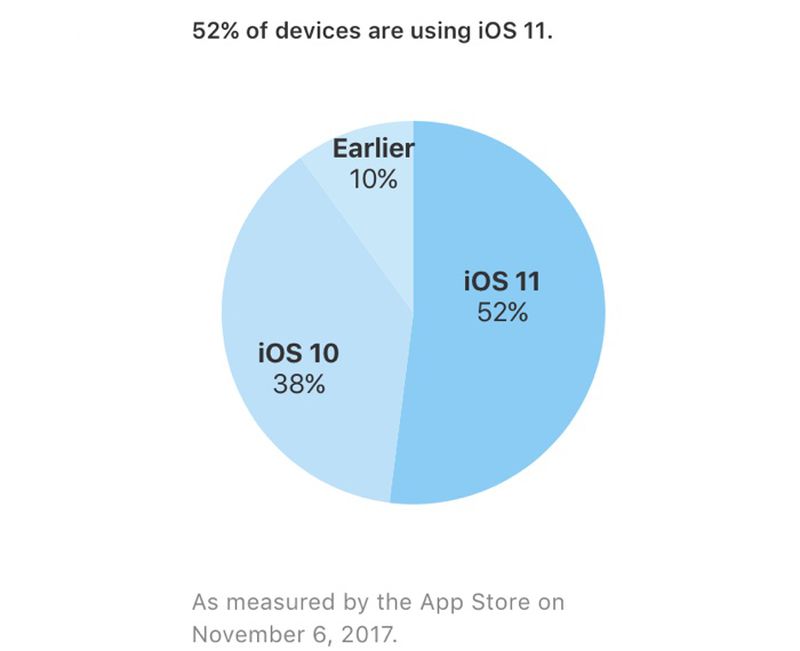 We've previously only seen installation estimates from analytics company Mixpanel, which appear to be quite a bit different. Mixpanel currently lists iOS 11 installation at just about 66 percent.

With iOS 11 installed on 52 percent of devices, 38 percent continue to run iOS 10. 10 percent are still on an earlier version of iOS.

iOS 11 adoption has been slower than iOS 10 adoption was last year, but the number of devices with the update installed has grown steadily since the new update was released.

iOS 11.2, an update currently in testing, will be the first major update to bring a new feature -- Apple Pay Cash -- which could encourage additional users to upgrade to the new operating system.

While on Android, 52% can't decide which is the latest OS version


Yet, all android phones are running as expected without slowing down their device.
Rating: 22 Votes

Goldfrapp
While on Android, 52% can't decide which is the latest OS version
Rating: 12 Votes

cmoore49
Wish I hadn’t updated.
Battery issues from the moment I downloaded. All sorts of new but confusing areas.
Rating: 11 Votes

Yet, all android phones are running as expected without slowing down their device.

You mean, all android phones are slowing down without running updates.
Rating: 10 Votes

WannaGoMac
Never ever going to upgrade from 10.3.3 as 6+ is slow already. iOS 11 brings absolutely nothing I care about, just speed lost. Heck if I could go back to iOS 9 i would...

But wow Apple sure makes it a pain to avoid it, their popup screen kind of hides the NO thanks and pushes the "install it later thanks"
Rating: 10 Votes

Someyoungguy
With iOS 11 installed on 52 percent of devices, 38 percent continue to run iOS 11. 10 percent are still on an earlier version of iOS