Apple's online store is down ahead of its education-themed "Let's Take a Field Trip" event at Lane Tech College Prep High School in Chicago today. The keynote, which won't be live streamed, begins at 10:00 a.m. Central Time. 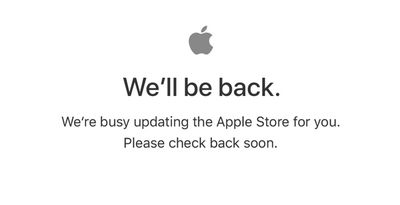 We've already outlined what to expect in detail, but as a refresher, the focus will likely be on a new entry-level iPad that may include Apple Pencil support. New educational software is also expected, potentially including updates to Apple's existing Classroom app and the debut of its rumored ClassKit framework.

There has also been rumors about a lower-priced MacBook Air or MacBook, estimated to cost around $799 to $899 in the United States, but a recent report indicated the notebook probably won't be ready for today's event.

When the store comes back online, there's a decent chance Apple's new AirPower wireless charging mat could be available to order, given a trio of reports that claimed the accessory will launch by the end of March. We'll also be keeping an eye out for a new optional case required to charge AirPods with AirPower.

Apple already announced a new collection of Apple Watch bands that will be available to order by the end of this month, so look for those to appear on the online store soon, potentially alongside new iPhone cases.

Apple may outline the availability of iOS 11.3, which is nearing the end of its beta testing period. We've outlined everything new in the software update, including battery health information, iMessage syncing via iCloud, health records, ARKit improvements, new Animoji characters on iPhone X, and more.

Wild cards would be a second-generation iPhone SE, a new Gold or (PRODUCT)RED edition iPhone 8, iPhone 8 Plus, and/or iPhone X, and more, but given Apple's event is at an untraditional venue and isn't being live streamed, today's announcements will likely be underwhelming for those expecting a lot.

MacRumors will provide full coverage of the Chicago event throughout the day, with a live blog, news stories, video recap, and more. Mac users can get headlines right on their desktops by enabling Safari push notifications. We'll also be live-tweeting the event through @MacRumorsLive on Twitter.

Apple said it will share a video recap of the event via its website and Apple Events app on Apple TV shortly after the keynote concludes.

ProwlingTiger
I hope they have courage left for WWDC.
Score: 16 Votes (Like | Disagree)

ersan191
Guaranteed to be new products then. Hoping they throw the AirPower up there.
Score: 8 Votes (Like | Disagree)

I can feel the hype, it's so high that I could cut it with a knife.

You mean thick right? If it’s that high you can’t reach it with a knife.
Score: 7 Votes (Like | Disagree)

dan9700
People need to stop over hyping this, it will just be cheaper ipads and macs its for students and teachers not everyone
Score: 6 Votes (Like | Disagree)

I aim to please.

I’d really like to see an updated Air, but I won’t get my hopes up.