Apple plans to introduce a new gold iPhone X color option in an effort to boost sales of the Face ID equipped smartphone, while a new revamped 9.7-inch iPad is set to drop in the third quarter of 2018, according to tech blog Mac Otakara.

Apple offered the iPhone X only in Silver and Space Gray at launch, so the prevailing rationale behind a new color is that it could perhaps lure new upgraders during a typically sluggish mid-season. 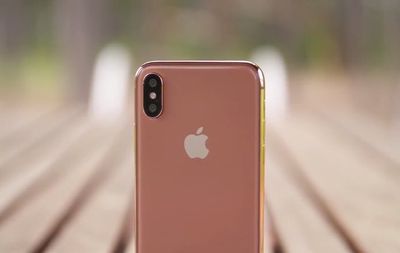 Image via Benjamin Geskin
As for the 9.7-inch iPad refresh, the Japanese-language tech blog reckons the sixth-generation device will go on sale in the third quarter.

Mac Otakara doesn't provide any clues as to the sources of its information, but the iPhone X rumor tallies with another one that emerged just last week, courtesy of Benjamin Geskin. Responding to online chat about a possible new colorway, the parts leaker shared pictures of an alleged "Blush Gold" iPhone X.

With regards to the 9.7-inch iPad claim, it's unclear if Mac Otakara is referring to an imminent low-cost 9.7-inch iPad refresh, which may include support for the Apple Pencil, or another model entirely. In December, for example, DigiTimes claimed Apple was planning to release its most affordable 9.7-inch iPad yet in late 2018.

However, Bloomberg claims the low-cost iPad refresh device will be announced at Apple's first event of the year on Tuesday, March 27, which the company has indicated will have an educational focus. Given the theme, the launch of new iPhone colors at this event seems unlikely, though not impossible.

Click here for the MacRumors roundup of everything to expect at Apple's "Let's Take a Field Trip" educational event on March 27.

Lol, so Apple thinks sales slowed down because it didn't come in gold. Wow...

BornAgainApple
I’m probably in the minority, but color options for the iPhone X don’t matter when it’s most likely going to be in a case. There is no way in hell I would carry one around naked.
Score: 6 Votes (Like | Disagree)

ChrisCW11
Lol, so Apple thinks sales slowed down because it didn't come in gold. Wow...
Score: 5 Votes (Like | Disagree)

Aluminum213
Looks to be as uneventful an event as Apple has had in many years
Score: 4 Votes (Like | Disagree)

It’s not a hardware event, it’s an educational event. This isn’t one of your average keynotes where they’re expected to announce new iPhones or other products. The only thing considerable hardware is an iPad and Apple Pencil really.
Score: 4 Votes (Like | Disagree)

Greenmeenie
There is a BIG difference between Tomorrow March 27th and the end of the 3rd quarter! Someone is way way off on their prediction of the release date for the cheaper 9.7” ipad. Lol. My guess is that it will be announced tomorrow at the March event, just like the last regular ipad was. I imagine the ipad pros will be announced in June at WWDC just like the last pros were, but since this will be a radical redesign of the pros, it could be pushed until the 3rd quarter. Who knows. I haven’t seen any part leaks for the rumored bezel-less ipad pros with face ID and without a home button at all, and June is only a few months away.
Score: 3 Votes (Like | Disagree)
Read All Comments