The OLED display on the Samsung Galaxy S9 is the best smartphone display on the market, according to lab analysis by DisplayMate. The screen on Samsung's latest handset showed consistent Top Tier display performance and became the first display to receive All Green ratings in all of DisplayMate's lab test and measurement categories. 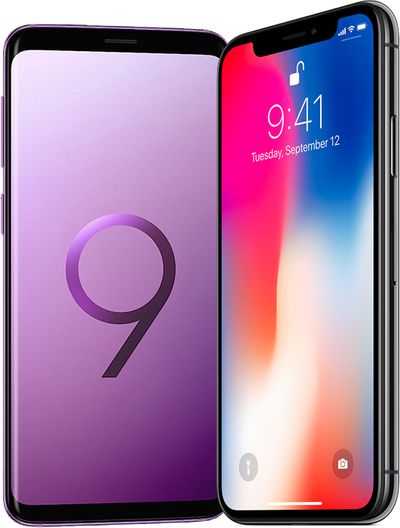 Based on our extensive Lab Tests and Measurements, the Galaxy S9 has an Impressive Display that establishes many new Display Performance Records, earning DisplayMate’s Best Performing Smartphone Display Award, and receiving our highest ever A+ grade.

Last year, DisplayMate praised the iPhone X as having the "best performing smartphone display" on a smartphone. It also congratulated Samsung – Apple's iPhone X screen supplier – for developing and manufacturing the "outstanding" OLED panel, but said that it was actually the Apple-developed "Precision Display Calibration" that made the biggest difference, since it transformed the OLED hardware "into a superbly accurate, high performance, and gorgeous display".

However, the Galaxy S9 has now knocked iPhone X off the top spot in DisplayMate's rankings, matching or setting new smartphone display records in several categories including highest absolute color accuracy, highest peak display brightness, largest native color gamut, highest contrast ratio, and lowest screen reflectance. Yet despite all that, the 3K 2960x1440 panel in the S9 is said to have the same power efficiency as the one found on the Galaxy S8 and Galaxy Note 8.

DisplayMate found that the color accuracy of the Galaxy S9's 5.8-inch display is "visually indistinguishable from perfect", thanks to a record-setting high absolute color accuracy of 0.7 JNCD, which is "almost certainly better than your existing smartphone, living room 4K Ultra or HDTV, Tablet, Laptop, and computer monitor". The 2,960 x 1,440 display, with 570 pixels per inch, also set a new reflectance score record with a 4.4 percent reflectance level, which measures display readability in bright conditions.

DisplayMate concluded by emphasizing the "tremendous performance advantages" that OLED displays now have over LCDs, which it said secured OLED as "the definitive premier display technology for Top Tier Smartphones in the foreseeable future over the next 3-5 years". Out of the three new iPhones Apple is rumored to be introducing later this year, two are said to be OLED models measuring in at 5.8 and 6.5 inches, and one is a 6.1-inch lower-cost LCD model. All three are expected to feature Face ID and edge-to-edge displays.

Apple is reportedly sourcing the majority of its OLED displays for the 2018 iPhone lineup from Samsung, but LG Display could provide displays for the 6.5-inch OLED iPhone, and Apple could also tap Sharp and Japan Display for extra supply.

display is "visually indistinguishable from perfect"

To be fair, they used this exact phrase to describe the iPhone X.

Which begs the question how much closer to perfect can "visually indistinguishable from perfect" be?
[doublepost=1519909801][/doublepost]

Look how stupid the iPhone X looks next to the S9 with that disgusting notch.

Look how stupid the S9 looks next to the iPhone X with those disgusting bezels.
Score: 74 Votes (Like | Disagree)

Alex.Roams
Look how stupid the iPhone X looks next to the S9 with that disgusting notch.
Score: 66 Votes (Like | Disagree)

Brian Y
Whichever phone has the better display - the one thing the iPhone X has done is started a shift away from horribly oversaturated OLED displays!

Which, no matter what badge your phone has, can only be a good thing.

Unfortunately, people here are actually embracing the 'notch' - like if a smartphone doesn't have a notch, it sucks. This is why people don't respect Apple fans.

Since when does obscuring part of screen is selling point?! Does that mean all prior iPhones were inferior because they didn't have this 'beautiful notch' or can someone please admit it is a compromise and the ideal solution is no notch?

I'm not "embracing" it - but I really don't see how it matters. Once you've used the phone for a few days, you don't notice it. At all.

The vast majority of people who moan about the notch are those who don't own one.
Score: 32 Votes (Like | Disagree)

Look how stupid the iPhone X looks next to the S9 with that disgusting notch.

Unfortunately, people here are actually embracing the 'notch' - like if a smartphone doesn't have a notch, it sucks. This is why people don't respect Apple fans.

Since when does obscuring part of screen is selling point?! Does that mean all prior iPhones were inferior because they didn't have this 'beautiful notch' or can someone please admit it is a compromise and the ideal solution is no notch?
Score: 30 Votes (Like | Disagree)

To be fair, they used this exact phrase to describe the iPhone X.

Which begs the question how much closer to perfect can "visually indistinguishable from perfect" be?
[doublepost=1519909801][/doublepost]

Look how stupid the S9 looks next to the iPhone X with those disgusting bezels.

jtrenthacker
Yes, but does it have a sweet notch at the top?
Score: 24 Votes (Like | Disagree)
Read All Comments