Apple in 2018 will release three new iPhones, according to a report shared by Bloomberg this morning. The three devices, as we've heard before, will include an upgraded version of the iPhone X, "the largest iPhone ever" with a screen size close to 6.5 inches, and a third less expensive model.

Apple is said to be aiming to offer "a model for everyone" to rekindle iPhone sales after iPhone X sales came in lower than analyst expectations last quarter. 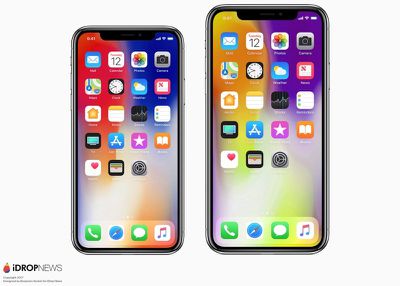 iPhone X Plus rendering via iDrop News
Bloomberg's report confirms details we've been hearing from KGI Securities analyst Ming-Chi Kuo, who often shares accurate insight into Apple's plans. Kuo has said for months now that Apple is working on a second-generation 5.8-inch OLED iPhone, a larger 6.5-inch OLED iPhone that can be thought of as an "iPhone X Plus," and a lower-cost 6.1-inch iPhone with an LCD display.

For the larger iPhone model, Apple is said to be considering implementing a dual-SIM feature that would make it easier for people to switch carriers when traveling, but Bloomberg says it's not yet clear if the company will implement the feature.

Apple hasn't made a final decision on including the feature and could choose to wait for E-SIM technology, which will connect phones to multiple networks without the need for a removable chip. Apple has wanted to offer E-SIM technology, but some carriers are resistant to the idea and Apple needs their support. A dual-SIM capability would provide a compromise.

Apple's largest iPhone, which will measure in at 6.5 inches, is code named "D33." According to Bloomberg, some prototypes of this device feature a screen resolution of 1242 x 2688. Kuo has previously said the device will feature 480 to 500 pixels per inch, similar to the new 5.8-inch model, codenamed "D32."

As you might expect, the display component and digitizer looks a lot like an iPhone X display, only larger. The cutout at the top for the TrueDepth camera is visible, but little else can be gleaned from the image.

According to Bloomberg, Apple is already running production tests with suppliers, and so we could start seeing a significant pickup in part leaks in the near future.

Chopper9
I can't believe these morons are going to bring out the iPhone X plus the size of the iPhone 8 plus. Instead of just giving us the SCREEN SIZE of the iPhone 8 plus in a smaller body (bezel-less). Nobody enjoys carrying around a phone that large!!!! It's been the only complaint of the plus size phones for 3 generations... we love the screen size... we hate the big bulky phone. How is this not completely obvious to anyone with half a brain cell?
Score: 34 Votes (Like | Disagree)

Also, that'll mean they have space for 2 SIMs, but not a headphone jack?! o_O
Score: 27 Votes (Like | Disagree)

currentinterest
I find quotes like this detract from the overall effect of the article.

“Apple is said to be aiming to offer "a model for everyone" to rekindle iPhone sales after iPhone X sales came in lower than analyst expectations last quarter. ”

Regardless of sales, these models were being designed and production planned long before any sales data were in. It is disengenuos to assert these models were designed to “rekindle” anything. It is simply poor journalism and the writer and editors should know better.
Score: 27 Votes (Like | Disagree)

peterh988
I hope they don't pull the 'better camera in bigger phone' trick.

I want the good camera in the smaller factor, please.
Score: 22 Votes (Like | Disagree)

stoopkidblues
I’m sorry but that is massive. Owned the ‘Plus’ versions before getting the ‘X’ and can say the smaller body makes the larger screen more accessible.

Even those with ”larger than average-sized hands” would have a hard time swiping Notification Center down with one thumb on that ‘Plus’ mock-up, right?

To each their own, but I just want Apple to stop limiting features exclusively to ‘Plus’ models just because they’re larger.
Score: 20 Votes (Like | Disagree)

William Gates
My wallet is ready
Score: 17 Votes (Like | Disagree)
Read All Comments

Sunday January 23, 2022 10:32 am PST by Juli Clover
Apple is working on a number of new products that are set to launch this fall, and Bloomberg's Mark Gurman says that it will be "the widest array" of new devices that Apple has introduced in its history. In his latest "Power On" newsletter, Gurman explains that Apple is working on four new flagship iPhones (iPhone 14, iPhone 14 Max, iPhone 14 Pro, and iPhone 14 Pro Max), an updated low-end Ma...
Read Full Article • 233 comments