Samsung Display will supply Apple with between 180 and 200 million flexible OLED displays for the iPhone in 2018, up from an estimated 50 million this year, according to The Korea Herald's sister publication The Investor.

While the report focuses on the iPhone X, it's likely that a portion of the OLED displays will go towards the "iPhone X Plus" rumored to launch alongside the second-generation iPhone X in the second half of 2018. 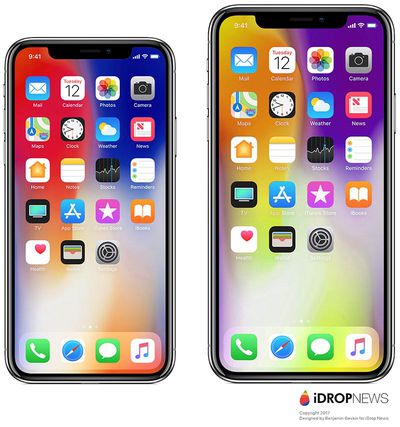 With both a full year of iPhone X sales and the addition of the iPhone X Plus to the lineup in 2018, Apple will undoubtedly need many more OLED displays, so today's report about Samsung quadrupling its production next year makes sense. Samsung could reportedly gain an extra $22 billion in revenue from the orders.

The report also claims Samsung has achieved around a 90 percent yield rate, compared to around 60 percent earlier this year, meaning it is getting more efficient at making OLED displays that live up to Apple's strict quality standards. This could lead to improved shipping estimates for next year's launch.

The new iPhone X and iPhone X Plus will likely launch around the usual timeframe of September to October, potentially alongside a new 6.1-inch mid-range model with an LCD display that is predicted to start at around $649 to $749.

Apple is likely to remain dependent on Samsung for supply of OLED displays next year, but the company is reportedly investing billions into LG building OLED display production lines dedicated to the iPhone by 2019.

the fact that APPLE made all PLUS owners downsize really sucked! so i'm hoping this is really happening next Sept. when new iPhones are released. X now is great but the Plus size will be magnificent!

Apple didn't make me downsize.... I didn't fall for all the hype and upgraded to an 8 Plus. Next year, again I'll buy the phone I want as opposed to the one everyone tells me I should buy.
Score: 19 Votes (Like | Disagree)

iapplelove
I love my iPhone X. A bigger version would even mean more to love.
Score: 9 Votes (Like | Disagree)

GlennFisher
the fact that APPLE made all PLUS owners downsize really sucked! so i'm hoping this is really happening next Sept. when new iPhones are released. X now is great but the Plus size will be magnificent!
Score: 9 Votes (Like | Disagree)

Eggtastic
Not too sure how I feel about the supposed X + still. I just got my X this past weekend and I had a 6+ for 3 years before that. I actually enjoy the smaller footprint but slightly larger screen. Especially when using the camera.
Score: 6 Votes (Like | Disagree)

macs4nw
Yes Sir, that's my baby..... perhaps the notch might shrink a tiny bit to satisfy the haters?
Score: 5 Votes (Like | Disagree)

slicecom
The iPhone X screen is already too tall to use comfortably. I can't imagine a plus sized one.
Score: 5 Votes (Like | Disagree)
Read All Comments